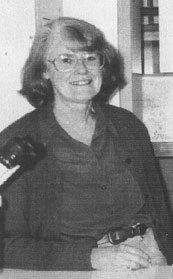 Marion Westmacott studied Architectural Drafting and worked in this field for several years. She also did Scientific drafting with the CSIRO, and Engineering drafting, specialising in Civil, Geotechnical and Environmental.

Marion spent sixteen years on cattle and sheep stations in NSW, NT. During this time she began collecting and drawing the local species of grasses and native plants on these properties, the art of water colour and applying it to botanical illustration.

From 1987 Marion began illustrating books: four Key Guides to Australian Wildflowers. Trees, Palms Ferns & Allies, Mammals and the Australian Flora. In a 1995 book The Australian Animal Atlas and four Environmental Sticker Books. Her illustrations have been published in the Flora of Australia, Scientific Journals, Gardening magazines and Australian Geographic.

Currently [2001] Marion works at the Royal Botanic Gardens, Sydney, and has been responsible for producing illustrations for interpretive signs for Sydney, Mount Tomah and Mount Annan Gardens. She has illustrated posters and designed the floral motifs for the Sundial and Fountain in the Herb Garden. During the past seven years she has run workshops and courses in Botanical Illustration through the Community Education Unit.

She has exhibited her work regularly since 1986.