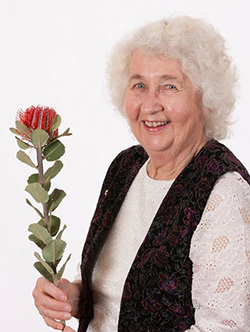 She grew up in southern Rhodesia (now Zimbabwe) and received a master's degree in paleobotany from the University of Cape Town. She married Bill White, a geologist; the couple came to Australia in 1955. White worked as a consultant for the Bureau of Mineral Resources in Canberra until the 1980s; she also consulted on a part-time basis for mining companies. In 1975, she was hired as a research associate for the Australian Museum; she established a collection of 12,000 specimens of plant fossils for the museum.

White began writing large format, well illustrated science books after her husband died in 1981.
She was the author of:

The Greening of Gondwana - The 400 Million Year Story of Australia's Plants (1986)
The Nature of Hidden Worlds - Animals and Plants in Prehistoric Australia and New Zealand (1990)
After the Greening: The browning of Australia (1994), received a Eureka Prize
Listen... Our Land is Crying (1997)
Running Down: Water in a Changing Land (2000), which was shortlisted for a Eureka Prize
Earth Alive! From Microbes to a Living Planet (2003)

White received honorary doctorates from four Australian Universities, and many other distinguished awards.

In 2003, Dr White purchased a large forested property, Falls Forest Retreat, approximately halfway between Taree and Port Macquarie in New South Wales; she established a covenant to protect the land and preserve its biodiversity. In 2013 she sold the property but with the covenant it can never be disturbed.

In her later years Dr White suffered from vascular dementia and a stroke. On 5 August 2018, she was found dead in her room at the Warrigal aged care complex.