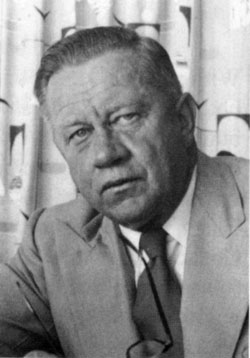 F.W. Whitehouse (variously known as Doc, Freddy, FWW among others) was an outstanding geologist/naturalist.

His education began at Ipswich Grammar School followed by a B.Sc. with 1st Class Honours in 1922 and M.Sc. in 1924 (University of Queensland). He received the Government’s Gold Medal and a Foundation Travelling Scholarship which enabled him to complete his Ph.D. on Australian Cretaceous ammonite faunas at Cambridge. He was awarded a D.Sc. in 1939 (UQ) for the outstanding pioneer work on Cambrian trilobites of the Georgina Basin which gained him international recognition. He was appointed to the Geological Survey of Queensland in 1925 and was seconded to teach in the Geology Department of the University from 3rd term 1925. He remained on the University staff from the middle of 1926 until 1955.

He enlisted as a sapper in the Royal Australian Engineers at the age of 40, rising to the rank of Major and was demobilised in 1945 with the honorary rank of Lieutenant-Colonel, having been involved in siting water bores in northern Australia, locating roads in Papua New Guinea and finding sites for successful amphibious landings on Borneo and other islands in 1944-1945.

He was a true naturalist seeking to provide an understanding to all, of the close relationship between geology, landscape and fauna and flora. A leading member of the Brisbane Aquarium Society, a Bryologist and President of the Queensland Anthropological Society at the time of his death, he was also instrumental (as is detailed in The Mayne Inheritance) in gaining the major bequest of land, which enabled relocation of the University to its St Lucia site. He gave a long (1934-1953) series of nationally broadcast lectures and news reviews over the ABC on a wide range of geological topics. He strove to introduce geology more widely to Queensland schools and compiled and freely circulated 50 different geological pamphlets. He provided several identified sets of rocks, minerals and fossils to more than 100 schools.