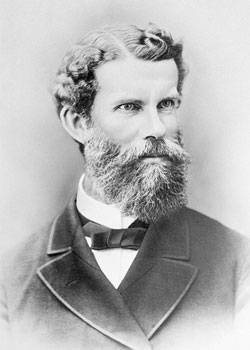 The family migrated to Australia and settled in Melbourne in 1852.  When he was 16 he obtained a position in the Geological Survey office and in 1861 became a field assistant to Richard Daintree, with whom he was associated in the survey of part of southern Victoria. In 1866 he succeeded Daintree as field geologist but resigned in 1866 because of a breakdown in health.  He became a licensed surveyor in New South Wales in 1872 and examined the newly discovered tin mines in the New England district. In 1874 he joined the Lands Department, becoming Geological Surveyor and in 1875 was transferred to the newly created Mines Department.  A systematic geological survey of New South Wales was begun under his direction.

He was regarded as an excellent man of science; he was elected a Fellow of the Geological Society of London and a Fellow of the Linnean Society, and held the positions of president of the Linnean Society of New South Wales and of the Royal Society of New South Wales.  He was the first man to suggest to the government the possibility of finding subterranean water in western New South Wales and the first bore was put down under his direction.  He did a good deal of research on fossils and his discoveries in gold-drifts and coal-measures brought him praise, as well as having a genus and several species of fossils named in his honour.

He is honoured in the name Eucalyptus wilkinsoniana R. T. Baker (1900)