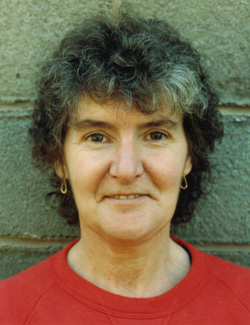 Until I was 10 years old I lived at Queenstown on the West Coast of Tasmania, where my father was an underground miner with the Mt. Lyell Mining Company for 16 years. The work was not conducive to good health and in 1950 we moved to Battery Point in Hobart where Dad obtained open-air work at a local shipyard.

There were seven children in the family and to supplement the income we all had jobs during school holidays and after school hours. It was easy in those days to obtain casual work as long as one was willing to do a days work for a days pay and we grew up believing in this. My first full time job, at the age of 15, was on the telephone exchange for the PMG. In later years and after having six children of my own I became a nurse. Between working and raising my family I didnt have much leisure time although I always loved the bush and open country and wild flowers.

After being widowed in 1981 I remarried and moved to Coles Bay to live. and it was here that my husband Ron pointed out to me a Nodding Greenhood. It was one of a large colony and I was immediately taken with the beautiful structure of this tiny flower. I could not believe that it was an orchid. To my mind an orchid was a larger exotic bloom with big bulbs. Ron was aware of a variety of native orchids that grew in close proximity to our house and he had always had an interest in them. I remember the first time I found two tall, blue flowered Thelmytra’s growing on a nature strip within the town boundary and raced home to get Ron to identify them for me, and the despair I felt when we met the shack owner from next door carrying a small bunch of wild flowers in her hand and among them was my two prized orchids. How dare she pick them. Mv love affair with native orchids had begun.

Ron and I spend many hours in the bush. We have learned to tread carefully and have developed a keen eye. Often we will find only leaves and if we feel that they are significant we will mark them by sticking twigs, upside down, into the ground, on the south side of them. This way we are able to go hack to them to see what has developed. Hence we have developed a means whereby we can find a locality again simply by identifying the sticks. We refer to this as our lesser GPS system, while the locals in the Coles Bay area have come to call them Williamson sticks and if any are seen, the area is given close scrutiny and we then receive a call to advise us that something is in flower. By involving others like this we find that most of the local population and shack owners have become aware of the existence of the orchids and are generally very interested in them. We always try and encourage people to enjoy them without picking them and to leave the habitat as near as possible to its natural state.

Our searches are not confined to the local area and one learned never to wear ‘good’ clothes when traveling. If we pass a spot that we think might be productive we go bush and check it out, and often turn up at our destination much later than expected. It’s hard to explain what makes an area appeal to us. but we have found some unexpected species just by following our instincts and have also seen parts of the state that we wouldn’t have thought to visit for any other reason.

Yet no matter how far off the beaten track we imagine ourselves to be. there are always beer bottles and discarded relics of an earlier visit by humans, so no area is really virgin territory.

What began as purely a leisure interest, making our bush walks more interesting, and giving us a reason to look further afield, has since became a crusade to find and document as many orchid species as possible. We are now very conscious of the fact that the eco systems and habitats that support these native orchids are fast disappearing and unless they are protected where possible many species will become extinct. To this end we have become involved with professional bodies and with other amateur enthusiasts who share this goal.

We now live at Carrick, a small village only 2O kms.out of Launceston in the North of the state and although the environs are much different to those of Coles Bay, we are still out there searching and have had many good finds and taken many interesting photographs. Our bookshelf contains a good range of books on the subject, and in spite of them having undergone significant study. I am still a dunce when it comes to identifying many orchids. I leave this task to Ron and the more experienced friends in the field.

My only claim to fame is that I love being an amateur botanist and strongly urge others to take up this enjoyable pastime. The bush has such a soothing effect and there is always something to see and enjoy them and to leave the habitat as near as possible to its natural state.