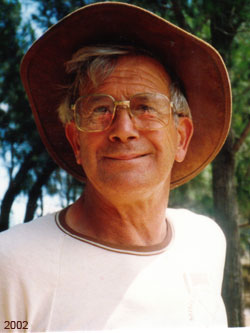 Born on the 28 August 1931 at Scottsdale, a small farming town in North Eastern Tasmania.

My Dad was a baker and pastry cook and my Mum was a very good small goods cook. My elder brother Brian and I were pretty dab hands with a slingshot and the surrounding countryside was our playground. Money was pretty tight in those early years and rabbit was staple part of the diet, and from the age of seven onwards Brian and I trapped rabbits as part of our daily chores. It was while checking the traps that I found my first native orchid. That would have been about 1938 and as I was passing a burnt out tree stump I spotted a small green flower nestled in this stump. . I now know that it was Pterostylis nutans more commonly called the Nodding Greenhood. It was a wondrous sight, with the sun shining through from behind, giving the flower a translucent effect. It looked so delicate and unusual that I was forever on the look out for more, and I suppose you could say that my interest in native orchids stemmed from this first sighting.

During the school holidays the family used to go to Bridport and camp on the foreshore near the beach and it was here that I found the little Prasophyllums growing. They were only spikes with no flowers and I used to wonder what they were as they were so different to the grasses in the area. No one was able to tell me, and that made me even more curious. Years later I was in the same area hunting with my dogs and I came across a tall spike with blue flowers on it. There were several in just one small area of light coastal scrub that is now pasture, and I could find no more in a wider search. This was what was known as the Blue Diuris that sadly is now an extinct species.

Around about 1965 I built myself a seaside home at Bridport. There were a lot of small ground hugging leaves on this block under the she-oaks and thinking these may he orchids I watched them for two years but never saw one in flower. The leaves disappeared in the heat of summer but always reappeared later in the year. I now know that these were Corybas.

In 1977 I went to live at Coles Bay, on the east coast of Tasmania, where I ran the local store and post office. In those days the road into the Bay was no better than a goat track of loose sand and only the dedicated campers and holiday makers who were familiar with the natural beauty of the area and all it had to offer risked life and limb to travel the road. There were only about 106 permanent residents living there, hut in the holiday season the influx of shack owners and holidaymakers swelled the numbers to over 3,000. This made the business a very seasonal affair and sometimes very quiet. and I used these quiet periods to do a spot of bush walking and explore the surrounds. It is a very different place today. The road having been rebuilt and sealed has made access so easy it is now one of Tasmania’s most visited resorts and there is no such thing as a quiet season, It is truly a paradise on earth, with magnificent scenery and a wide range of pursuits for all age groups.

The area was also found to sport quite a few varied species of terrestrial orchids and this is where my interest turned into an obsession and my research began in earnest. At any time of the year it seemed that an orchid of one variety or perhaps several different varieties could be found if one had keen eyesight and an urge to wander. Sadly progress has taken it’s toll on the eco system of the area and the future for these orchids is very tenuous indeed.

My wife Kath is a good companion who enjoys the bush and after I sold the shop and retired we spent many happy days together trekking the countryside, and became such a familiar sight around the locality that before too long the locals had christened us the ‘Bottoms Up Brigade.” Our bottoms became as familiar as our faces as we bent to study our latest find. I recall a time when we were some 300kms. from home, between Exeter and Frankford on the West Tamar, in the proverbial bottoms up position, when a passing motorist gave us a broadside, "get out of there Williamson, have you found any new ones ?"

Over the years at Coles Bay we gained a large following and did much to help others discover and enjoy the beauty of our native orchids and were often called upon to photograph an orchid that someone had found. We even had the local council worker consulting us before he mowed certain nature strips and we introduced overseas enthusiasts to our hobby and search areas, as well as anyone who showed a genuine interest and respected the eco system that is such a vital part of these orchids. Much data was taken back to Kew in the UK for inclusion in their data bank.

We now reside at Carrick, a small village 20kms. from Launceston. and yes we still seek out new sites and new species. We consider our interest in native orchids to be primarily a hobby, but with a strong enough interest to consult with professional bodies to accurately identify and record our finds for inclusion in worldwide data banks and literature on the subject. We are also doing our best to preserve their habitat and eco systems so that they arc not lost to future generations.