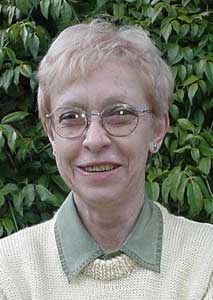 In 1982 Jan was asked by a friend who worked in Department of Territories personnel section if she could fill in for a week as switchboard operator at the Australian National Botanic Gardens. She enjoyed this week but when asked to return on a short term basis a few months later she did not think she would still be there in the year 2000.

Between phone calls and assisting visitors at the information desk, Jan started tidying up the somewhat neglected photograph collection at the Gardens. Over time the slide collection became the most important and the favourite part of her job. In May 1989 she was appointed to the newly created position of Photograph Curator.

During this time the slide collection has evolved into the National Plant Photographic Index and achieved national, and lately with its inclusion on the Gardens World Wide Web site, international significance.

Jan retired from the ANBG in 2004, but continued as an Honorary Associate.

As a sideline to the Photo Curator work Jan also became involved with collating a database of information about botanic gardens in Australia in collaboration with Murray Fagg. Jan became co-author of the Second and Third Editions of the Directory of Australian Botanic Gardens and Arboreta (1994, 1998), published by the Australian National Botanic Gardens. This lead to her involement as a co-author with Leslie Lockwood and Murray Fagg in 2001 of 'Botanic Gardens of Australia - A Guide to 80 Gardens', New Holland Publishers, Sydney.