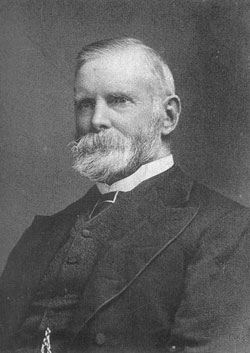 Became headmaster at Geelong Grammar School in 1863 and held this responsible position for 32 years until his death. In those three decades he was an assiduous dredger and collector of sea-weeds in the vicinity of the Heads, adding much to our knowledge of the marine flora. His "Catalogue of Algae collected at or near Port Phillip Heads and Western Port" (Proc. Royal Soc. Vic. n.s. IV.. p. 157, 1892) consummated the work of half a life-time. Wilson's algal collection is now in the Victorian State Herbarium - excellent, named material, and a model of tidy mounting. One of his notable publications was the useful little handbook, "Excursions near Geelong in Search of Plants of Florula Corioensis with a List of Those Collected by J. Bracebridge Wilson".