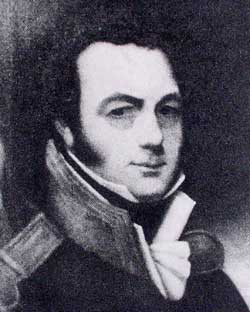 Born in the parish of Ephall, Scotland. Surgeon in the Royal Navy.

He was cast away in Torres Strait and eventually visited the northern settlement at Melville Island from Java, which he and others reached in boats. From Melville Island he sailed to Western Australia. In 1829 he explored the river near King George’s Sound and discovered the River Denmark. He was a Surgeon Superintendent of convict ships, and made many voyages to Tasmania and New South Wales.

He was the author of "Narrative of a voyage round the World" (London, 1835), which contains much valuable information in regard to the aborigines and Australia.

He settled down at Braidwood, N.S.W., the township having been named after him by the then Governor, Sir Richard Bourke.

He was a friend of Allan Cunningham and brought seeds and roots of many W.A plants to his friend at the Sydney Botanic Gardens.

He is commemorated by Grevillea wilsonii A.Cunn., the seeds of which he brought from W.A. to Allan Cunningham.