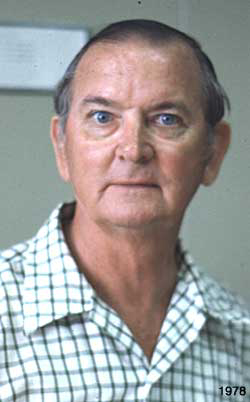 It was with a sense of considerable loss that the botanical community in Australia learnt of the death in Sydney on 2 September, of their colleague John Womersley after a short illness. They may have known he had come to Australia from England in 1930 and, two years later as a 12 year old, went to Adelaide High School, then the University of Adelaide and South Australian Teachers' College. His first job as a teacher lasted about 18 months; he then joined the CSIRO Division of Soils.

In June 1946 he was offered the position of Forest Botanist with the Provisional Administration of Papua and New Guinea, and in August arrived in Lae. During the next 29 years John lived in Lae, became Assistant Director, Division of Botany, of the Department of Forests, and expanded the 2000 or so botanical collections of the Australian Army Forestry Company to in excess of 250,000 as the National Herbarium. He developed the National Botanic Garden at Lae. With his wife Mary he raised five children.

There are few contemporaries who travelled so widely in Papua New Guinea, much of it on foot. He also visited the Solomon Islands adjacent and Dutch New Guinea, as it was then called. Many overseas contacts, scientific and otherwise, benefited from John's intimate knowledge of the geography, natural history and people of Papua New Guinea: close links were made with colleagues in Indonesia, Singapore, Malaya and Thailand and these countries visited frequently.

John's interest in showy species suitable for display in gardens or botanic gardens included a detailed appreciation of the genera Rhododendron, Begonia, Hoya and Tecomanthe, their cultural requirements and where they could be located in the forest. Many groups of scientists enjoyed John's leadership on field excursions, and in 1971 he was a chief organiser for the Australian and New Zealand Association for the Advancement of Science Congress held in Port Moresby: he organised all conference tours.

He inaugurated the Division of Botany publication program, and was the author of numerous books and papers including being a major contributor to the Encyclopaedia of Papua New Guinea. He was a Trustee and Board Member of the National Museum, was Councillor and President of the Papua New Guinea Scientific Society and, characteristically, a member of Lae Town Council! Only in his retirement in Adelaide did I come to know John and learn to admire his unflagging enthusiasm for matters botanical. The U.N, Food and Agriculture Organisation engaged him on consultancies in Bangladesh and Cameroon: the Singapore Government sought his advice, and Bougainville Copper asked his advice on revegetation of mine tailings. The P & 0 shipping line engaged the services of both John and Mary as experienced escorts and lecturers on their Pacific cruises.

He was working with Dr Bob Withers on Vireya section of Rhododendron in anticipation of a book on the group. He was cooperating with Dr Nancy Bowers of the Department of Anthropology, University of Auckland on Saccharum edule. He had recently completed the work of supervision of 'Friends' volunteers in the State Herbarium of South Australia, permitting publication of the first two editions of a computerised census of the South Australian flora.

I already miss his large frame and jovial comments. I am sorry he will not see the new tropical conservatory completed in the Adelaide Botanic Garden, a project for which he was a staunch advocate from the very beginning, but a number of the tropical plants he introduced will certainly be growing inside giving public pleasure for many years to come.