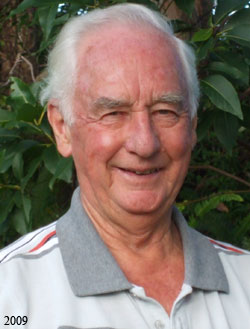 He started his professional career as an industrial chemist. He had a keen interest in the propagation and cultivation of Australian native plants and was involved in the establishment of the Society for Growing Australian Plants (SGAP) and the setting up of the Ku-ring-gai Wildflower Garden in the late 1950s and early 1960s. Appointed Curator of the Canberra Botanic Gardens (now Australian National Botanic Gardens) in 1967. Landscaped the Australian Pavilion at Expo'70 in Japan. Undertook extensive field collecting 1967-81.

He retired from the Australian National Botanic Gardens in 1981 and moved to Coffs Harbour, NSW, to undertake private horticultural consulting and initiate a foliage export market for native plant leaves for the florist industry. He also designed botanic gardens in Coffs Harbour, Mildura and Tamworth and a nature park at Port Macquarie.

He was made a Member of the Order of Australia in 1983 for services to horticulture.

He published a landmark series of books, in collaboration with Murray Fagg, on the horticulture and general botany of the Australian flora, including Australian Native Plants - Propagation, cultivation and use in landscaping released in 6 fully revised editions (1979, 1983, 1988, 1996, 2003, 2013); Banksias, Waratahs and Grevilleas (1989) and Bottlebrushes, Paperbarks and Tea Trees (1993), and Eucalypts: a celebration (2010).

John died on a 3-day trip to Burnswick Heads, near his home town of Coffs Harbour, with his wife Marcia by his side, on 17 July 2014.

Adenanthos ileticos E.C.Nelson is named for John Wrigley, with the epithet derived from the Greek for “to wriggle”. In addition, Wrigley material has been used as the type specimens for ten Australian plant taxa. Five of these are collections from the wild and the remainder were collected from living plants grown at the Australian National Botanic Gardens from material originally collected by John.

In 1995 John talked to Mathew Higgins as part of an ANBG Friends-sponsored Oral History project, the transcript of that interview is on the web.

The ANBG honoured John Wrigley with a memorial plaque at the Rock Garden on 21 Oct 2005, as part of the celebrations for the 35th anniversary of the official opening of the ANBG.

His publications number 75 (17 books, 58 papers), 2 CDs (interactive computer garden software), and 1 calendar. There are 30 unpublished internal reports prepared by him in the Australian National Botanic Gardens Library and Archive.