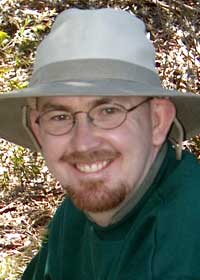 Grew up in Darwin.

In 1989 completed a B.App.Sc. with majors in ecology and natural resource management from the University of Canberra.

In January 1990 started work as a technician with the Australian National Herbarium, CSIRO Plant Industry in Canberra. During the next 5 years worked mainly on the loans and exchange functions, curation and botanical field work.

In 1995 accepted position as Australian Volunteer International with the Indonesian Network for Plant Conservation at Bogor Botanic Gardens in Java, Indonesia. During the next two and half years worked with numerous staff at the botanic gardens to run activities of the network, establish collaborative research projects and assist in the training of gardens staff.

In 2002 accepted position as Plant Records manager at the Australian National Botanic Gardens. From 2003 until he left the gardens in 2006 he was also Registrar of the Australian Cultivar Registration Authority (ACRA).

From 2006 he has been the Curator of the Australian Tropical Herbarium in Cairns, Queensland.