Some fungi are found only in burnt areas, or at least have strong preferences for burnt areas, and there are others which can do well in unburnt areas but get a boost from fires. For example, while Morchella elata

will produce fruiting bodies in the absence of fire, abundant fruiting body production can be triggered by fire. About a year after a severe bushfire in Namadgi National Park south of Canberra, this fungus produced hundreds of fruiting bodies in one particular locality. 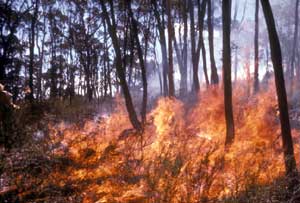 If you’re searching for information about such fungi you can find a variety of adjectives used to describe them, some derived from various Latin or Classical Greek roots - anthracophilous (literally "coal-loving"), pyrophilous ("fire-loving"), carbonicolous ("coal-inhabiting"). They are also called phoenicoid or fireplace fungi. The word phoenicoid is derived from Phoenix, the mythical bird which was said to live for 500 years and then set fire to its nest and die there - whereupon the new Phoenix would arise from the ashes of the old one. At any given time there was only one Phoenix alive.

Another place to find some of the phoenicoid fungi is on soil that has been steam sterilized.

One effect of fire (or heat in general) is that it stimulates the germination of the spores of a number of fungi, including species in the genus Anthracobia

. Interestingly, the heat of a fire may also induce the germination of the spores of various dung fungi that are lying dormant in the soil. The spores of many of the species involved would often be deposited on grass and other vegetation that is eaten by herbivores, after which the heat and digestive juices within the animals would make the spores ready for germination once they’re ejected with the faeces.

As well as stimulating spore germination, fires will also stimulate the sclerotia of some species to produce fruiting bodies. An Australian example of this is Laccocephalum mylittae, previously called Polyporus mylittae

. One of the photos shows a roughly spherical sclerotium, cut open to reveal the internal structure, and the other shows a couple of fruiting bodies. Note that while fire will trigger fruiting body production, it is not essential. These fruiting bodies were produced by keeping a slice of a sclerotium moist and in a warm room for a few weeks.

Heating also kills many of the soil micro-organisms that would often compete with, or be antagonistic to, fungi. The phoenicoid fungi undoubtedly take advantage of this reduced competition to colonize burnt areas. The genus Pyronema

occurs in burnt areas worldwide and the fruiting bodies of this genus appear fairly early after fires. Studies on overseas Pyronema species have shown that the mycelia of these species grow very rapidly and are able to colonize large areas quickly. The species pictured here was photographed on Black Mountain in Canberra, just a few weeks after a severe bushfire. The individual fruiting bodies are only about a millimetre in diameter but appeared in such profusion that they blended to create pinkish-orange carpets across the burnt soil. You can see a few individual fruiting bodies in the photo, sitting apart from the massed ones. At the time this photograph was taken, the carpets of Pyronema covered extensive areas of Black Mountain Reserve.

Either way, the Pyronema mycelium grows well enough to be able to produce fruiting bodies.In the latter instance, where there’s established competition, Pyronema does poorly.

Fires also change soil chemistry, the ash temporarily increasing the alkalinity and various studies have shown that some of the phoenicoid fungi are responding primarily to the increased alkalinity, rather than to the fire itself. Such fungi can also be found in alkaline habitats, for example areas where building mortar or plaster has been dumped. Pyronema domesticum is an example of a fungus that can be found on plaster.