Botanical name. Podocarpus is derived from two Greek words pous= foot, and karpos= fruit, referring to the fleshy fruit stems. The species name elatus, is Latin for 'tall', refers to how tall the trees grow.

Features. Plum Pine trees grow to 40 m and are fast growing, taking 8 to 10 years to reach maturity. They do not have cones like the other conifers but instead have a single seed attached by a fleshy stem to the branch. This clearly shows that conifer seeds are not surrounded by a fruit. The male and female cones are found on different trees. Birds help disperse the seeds of Plum Pines. Podocarpus plants are fire tolerant (unlike most other conifers).

European use. The wood has a very fine, even texture and a straight grain with inconspicuous growth rings. It has been used for table tops, furniture, packing cases, kitchen utensils, musical instruments (piano keys and violin bellies) and wood turning.

Aboriginal use. The fleshy stems of the seeds were eaten by Aboriginal people in some parts of Australia.

Evolutionary history. This is a large genus of about 95 species, mostly found in the southern hemisphere in warm-temperate to tropical areas of New Zealand, north through south-east Asia, Japan, Nepal and the cooler parts of South America. Podocarps appeared in the fossil record at the beginning of the Triassic period (250 million years ago). This was before the great super continent Pangaea broke up. The Podocarps originated in the southern continent, Gondwana, and did not have time to spread to the northern continent, Laurasia, before Pangaea (which consisted of both Laurasia and Gondwana) broke up. 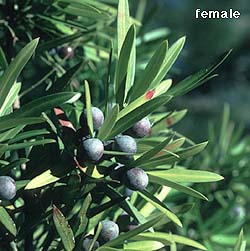