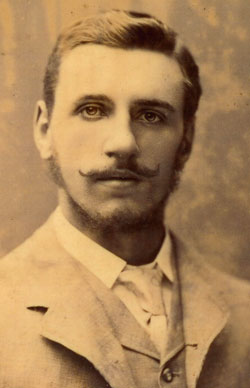 His father was a master pearl button maker who later became a retail brewer. Henry Baron attended the in .  When he was 19 he decided to immigrate to for health reasons and arrived in on board the SS Hampshire on 31st July 1883.  On 26 March 1885 he married Emily Bradbury who had come to with her family on board the same ship.  In 1889 they moved to and for most of the remainder of his life he lived in Drummoyne.  For a short period he moved to , renting his house in Drummoyne. On his return, in about 1938, he and his wife moved into where he remained until his death.

As botanical artist and lithographer he contributed to J.H.Maiden, The flowering plants and ferns of New South Wales (1895-1898).

From his library, it seems he was a typical, educated Victorian man who was interested in a great variety of subjects including natural science.

He always spelt “Allcock” with two “l”s and that is how it is spelt on his birth certificate although some other relations spelt it with one “l”.