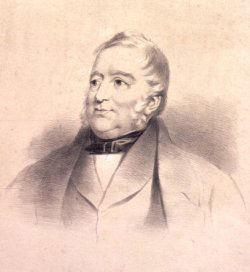 Author and colonial secretary, the son of Rev. James Bicheno and Ann, his wife. His father (d.1831) was a Baptist minister, schoolmaster and author of numerous books and pamphlets. Bicheno grew up at Newbury and there wrote An Inquiry into the Nature of Benevolence, Chiefly With a View to Elucidate the Principles of the Poor Laws, and to Show Their Unmoral Tendency (London, 1817). In 1821 he married but his wife died in childbirth within a year. He was called to the Bar of the Middle Temple on 17 May 1822, and joined the Oxford circuit, but did little legal work and continued his economic and scientific studies.

In April 1812 Bicheno had been elected a fellow of the Linnean Society. His papers, 'Observations on the Orchis militaris of Linnaeus' and 'Observations on the Linnean Genus Juncus' were printed in the society's Transactions in 1818, and another, 'On Systems and Methods in Natural History' in 1827. His address at the anniversary meeting of the Zoological Club of the Linnean Society was published as a pamphlet in 1826 and his paper on 'The Plant intended by the Shamrock of Ireland', appeared in the Royal Institution's Journal in 1831. With several others he assisted Sir William Jardine in preparing the two volumes of Illustrations of Ornithology (Edinburgh, 1830). In 1825 he was elected secretary of the Linnean Society in succession to Alexander McLeay. In February 1832 had the pleasant duty of informing Allan Cunningham that the society's council was remitting the fees payable on his election as a fellow because of the 'important services he had rendered to Natural Science', especially in botany, during his long residence in New South Wales. In May 1827 Bicheno was elected a fellow of the Royal Society.

He resigned as secretary of the Linnean Society in 1832 and went to live at Tymaen, near Pyle, Glamorganshire, where with money from his wife's estate he became a partner in some iron-works. They proved an unsuccessful investment and he sought profitable employment elsewhere.

In September 1842 Bicheno was appointed colonial secretary of Van Diemen's Land at a salary of £1200. In London he was told that Sir John Franklin was about to be recalled, and this news was dragged from him by Lady Franklin soon after his arrival next April at Hobart Town in the John Renwick. Bicheno quickly acquired a grasp of his official duties and was wise enough to treat them with detachment. Of all the early colonial secretaries in Van Diemen's Land, his personal views were least reflected in the official records of his department. The colony was in deep depression and he had to refuse employment to several medical officers and clerks unwanted in New South Wales since that colony had ceased to receive convicts from Britain. At the same time Van Diemen's Land had to receive prisoners sentenced in New South Wales to transportation, although pleas to permit conditionally pardoned convicts to seek work on the mainland were rejected. Nothing seemed to disturb Bicheno's affable calm. His quiet efficiency and punctual method were comfortably masked by a portly figure, jocular manner and homely speech.

In private life Bicheno found great satisfaction in art, music and good living. In 1844 he became president of the committee that planned the first public exhibition of paintings in Australia. In spite of scornful sceptics he assured its success by giving a series of 'artistical parties', inviting the gentry to his home to see his own pictures and regaling them with delicacies and champagne. He also pursued his interest in botany. For some years he lived in a stone house on the banks of the New Town Rivulet, where on his small farm he spent much time and money experimenting with plants. In 1849 as vice-president of the Mechanics' Institute he lectured on 'The Philosophy of Botany', entertaining his hearers with poetic excerpts from the Psalms to Dr Johnson, proclaimed that 'gardening advances civilization by combining the innocent, useful and beautiful' and urged them on their wintry homeward way to 'look at the patterns of bright gold in the moonlit sky'. More seriously he read to the Royal Society, of which he was an early vice-president, papers 'On a specimen of Pristus cirrhatus', and 'On the potato as an article of national diet, and the potato disease in connexion with distress in Ireland', both being published in the society's Transactions in 1851.

After a short illness Bicheno died in Hobart on 25 February 1851. His estate of less than £1600 was left to his relations and to the one remaining servant of the five he had brought with him from England. His herbarium was bequeathed to the public museum at Swansea, Wales, and his library of 2500 books to the first Tasmanian Public Library, on condition that the colonists subscribed £300 to his estate. His portrait is in the rooms of the Linnean Society, London.

Source: extracted in part from Australian Dictionary of Biography