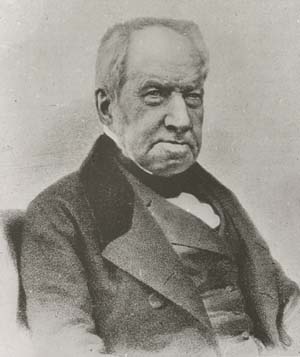 Acknowledged as the leading British botanist to collect in Australia during the first half of the 19th century.

Studied medicine and joined the army as a sugeon in 1795. One of the scientists who accompanied Flinders on his historic voyage to chart the coast of Australia, leaving Britain in December 1801 and ending in Sydney in June 1803. Brown stayed in Australia until May 1805. He published the results of his collecting in his famous "Prodromus Florae Novae Hollandiae" in 1810.

He succeeded Dryander as Banks' librarian, and on Banks' death in 1820 inherited his library and herbarium. This was transferred to the British Museum where Brown became the first Keeper of the Botanical Department.

Portrait: From an 1859 lithograph by Rudolf Hoffmann, published in George André Lenoir's Gallerie ausgezeichneter Naturforscher (1860) [The lithograph was based on a photograph of Brown taken in 1855 by a London commercial photography firm, Maull and Polyblank, as part of their series "Photographic Portraits of Living Celebrities".]