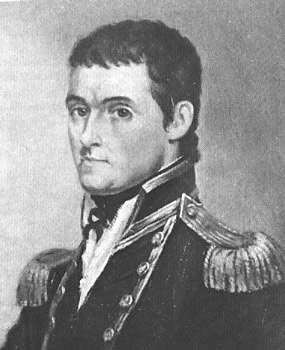 He entered the navy in 1789. From 1791 to 1793 he served as midshipman under William Bligh {1754-1813) on a voyage to Tahiti. In 1794 he saw action in H.M.S. Bellerophon at the naval battle of the 'Glorious First of June'. The next year he sailed for Port Jackson aboard H.M.S. Reliance in which George Bass (1771-1803) was surgeon. After their arrival in Sydney they explored Botany Bay and George's River in a boat of 2.5 metre keel called the 'Tom Thumb'. From 7th October- 1798 to 12th January 1799 Flinder's commanded the 'Norfolk' on an expedition in which he circumnavigated Van Diemen's Land (Tasmania) and thus proved it to be an island. In March 1800 he returned to England and in 1801 published his 'Observations on the Coasts of Van Diemen's Land, on Bass's Strait and its Islands and on part of the Coast of New South Wales'.

Flinders was promoted commander and appointed as captain of H.M.S. Investigator. In April 1801 he married Ann Chappell of Lincolnshire and on 18th July he sailed for Australia -his request for Ann to accompany him was refused by the Admiralty. Robert Brown and his assistants were part of the scientific expedition on this voyage to explore the southern coast of Australia. Flinders reached the western part of 'the Unknown Coast' (W.A. and S.A.) on 28th January 1802 and made a landing in Fowler Bay. In February he entered the mouth of Spencer Gulf and on 22nd March Kangaroo Island was discovered. On 8th April 1802 the corvette Le Geographe was sighted and Flinders exchanged information amicably with the Captain, Nicholas Baudin (1754-1803). He arrived in Sydney on 9th May 1802, having completed the task given to him by the Admiralty in England.

Flinders wasted no time and on 22nd July he sailed north along the eastern coast of New South Wales and Queensland. He made a detailed survey of the Queensland coast up to the Gulf of Carpentaria. He explored Keppel Bay and Capricorn Coast between 9th August and 20th October 1802, landing at Curtis Island, Port Clinton, Shoalwater Bay and Percy Islands. Soon after passing through Torres Strait, the Investigator was found to be not only leaking badly but also the timbers were rotten. He eventually circumnavigated Australia arriving at Port Jackson on 9th June 1803.

Flinders was anxious to return to England and left Port Jackson in August 1803 as a passenger aboard H.M.S. Porpoise. However, on 17th August 1803 the Porpoise struck a reef and was lost. Ninety-four survivors were cast on a small island while Flinders sailed back to Sydney aboard the ship's cutter and arranged their rescue.

Flinders sailed to England in the schooner Cumberland but the little ship leaked so badly that Flinders decided to stop at Mauritius, then known as Ile de France. He arrived there on 17th December 1803, the day after Le Geographe had left for France. Flinders was arrested because of the war between Great Britain and France. His health suffered considerably despite being allowed some parole. The French governor continued to hold Flinders contrary to receiving orders from Paris in 1807 to release him. Finally, in June 1810 with the British fleet blockading the island Flinders was exchanged.

Flinders returned to England on 23rd October 1810 and was received with honours and promotion to post-captain. He completed the text of 'A Voyage to Terra Australis' but died before the first copy of the book arrived on 18th July 1814. In his popular book Flinders was the first to use the name 'Australia' consistently, and as a result the name was gradually adopted. He was an intellectual who was enlightening and very capable. He expressed spontaneous gratitude to the people of Mauritius who befriended him and was very considerate of his botanist aboard the 'Investigator' stopping as often as he could 'in order that the naturalists may have time to range about and collect the produce of the earth'.

Flinders' name is commemorated by Flinders Bay, Flinders Chase, Flinders Ranges and Flinders Group of five islands in northern Queensland. The botanists have honoured him with the genus Flindersia and family Flindersiaceae.