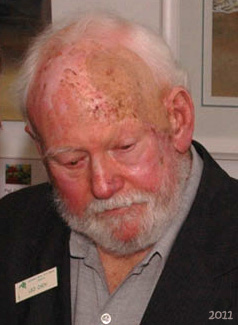 His interest in native orchids came through a general interest in plants, at that time cacti and succulents. However when the establishment of the Australian Native Orchid Society (ANOS) in 1963 offered an opportunity to further this interest, he became a foundation member, although not a member of the then Wollongong and District Native orchid Society (now ANOS Illawarra) until July 1983.

In 1970 he wrote the text for the book 'Australian Native Orchids in Colour' with photographer, Eric Rotherham. He has had over 80 papers, mainly on orchids, published in various books and journals, including one read at the 5th World Orchid Conference in Hamburg, Germany. Forty-one of these articles have been for The Orchadian. During the writing and preparation of these papers Leo became an accomplished botanical artist and photographer and has also contributed in this vein to the ANOS Illawarra Bulletin and meetings as a speaker.

His active field work has located many orchid species including Arachnorchis cadyi (collected in 1958), which when originally discovered was known as Caladenia sp. aff. fitzgeraldii until a revision by David L. Jones (DLJ) in 2007. Leo also described and named Pterostylis plumosa in 1969. The species was also in the DLJ revision and is now known as Plumatichilos plumosus. This work has been of great value not only to those interested in native orchids generally but specifically those more focussed on the species available in the Illawarra, Shoalhaven and Southern Highland areas and Leo has been more than willing over many years to share this information with all, including locations of several rare and endangered species. Other notable finds have been Calochilus pulchellus, which was at the time known as Calochilus sp. aff. grandiflorus. Leo was also the first to locate Prasophyllum affine in 1959 between Callala and Currarong after it was considered to have been lost from its original location between South Head (Sydney) and Botany Bay. Both species are now listed as vulnerable or endangered.

His wide experience and body of work particularly in the Shoalhaven, Illawarra and Southern Highlands has been of great help to those who follow his example and he is always willing to answer any question or identify a mystery orchid. Leo continues to write and for several years despite periods of poor health has been working on a book of Pterostylis orchids of the world.

It is for the above reasons Leo was honoured with Life Membership of the ANOS Illawarra Group at the 2014 Spring show.