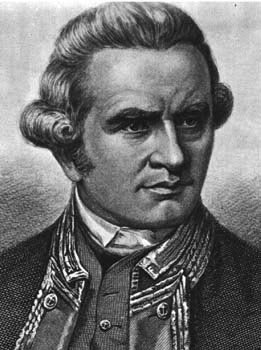 Born on 27th October 1728 at Martonin-Cleveland, Yorkshire, England and was killed on 14th February 1779 at Kealakekua Bay (Hawaii).

He was the son of a Scottish labourer and his Yorkshire wife. At 19 he took up a three year apprenticeship under John Walker, a Quaker coalshipper of Whitby. In 1755 Cook joined H.M.S. Eagle under the command of Hugh Pallister, and within a month was master's mate. In 1758-59 Cook was the master on 'Pembroke!. It took part in the St. Lawrence River operation which led to the capture of Quebec. He was transferred to H.M.S. Northumberland surveying the coasts of Nova Scotia and Newfoundland. In 1764 Cook was given his first command in the 'Grenville'. He soon got the reputation as a good surveyor. In addition his observations of an eclipse of the sun on 5th August 1766 brought him to the notice of the Royal Society. On 26th May 1768 Cook was commissioned as lieutenant and a day later he joined H.M. Bark Endeavour as captain.

He sailed on 26th August 1768 with a company of 94 including botanists Joseph Banks and Daniel Solander, and the astronomer Charles Green. Cook had his instructions to determine the existence of a southern continent. Accordingly he sailed for New Zealand and later, at 6 p.m. on 19th April 1770 Lieutenant Hicks saw land. Cook sailed north landing at Botany Bay on 29th April. Their second landing was at Bustard Bay. On 25th May he named Keppel Bay the Islands and sailed to within six kilometres of Yeppoon. On 11th June the Endeavour stuck fast on a coral reef at high tide near Cooktown. Repairs and gales delayed Cook for seven weeks. However after naming Cape York and being satisfied that New Guinea and New Holland were separate islands he sailed to Batavia (Java) arriving on 11th October. After more repairs Cook sailed on 26th December reaching England on 13th July 1771.

He was promoted commander and given charge of his second voyage in 1772-75. The two ships, 'Resolution' and 'Adventure' left Plymouth in July 1772, and on 17th January 1773 entered the Antarctic Circle, the first in history to do so. On his third voyage Cook, now post-captain, went to explore the Pacific coasts of North America and Siberia. In November 1778 he was at Hawaii where he was killed.

Cook's strength was his self-confidence. His greatest achievement for Australia was to provide opportunity for Banks and his assistants to collect. the unique flora of this land. Captain Cook's name is commemorated in Queensland by Cooktown, Cook Pastoral District, Cook Highway, Cook Reef and Cook Shoal.