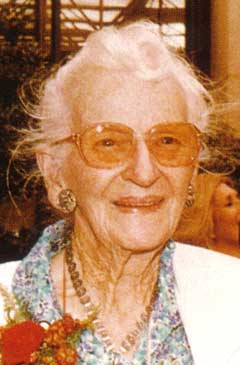 Family migrated to Denmark, WA, in 1924 under the Group Settlement Scheme.

"We just lived in these shacks - no floor, no doors, no windows. I was
out to work by the time I was 12. I was 20 when I got married and
then I proceeded to have a family. Then the war came, my husband
went away to Japan and didn't come back again".

She married second husband, Cliff, in 1954. He was in the air force and became the groundsman at the Albany airport.

A fascination with the wildflowers that grew around her house, near the airport in Albany, led florist Eileen Croxford to teach herself the botanical specifications of much of the south coast regional flora. She organised the opening of a new Albany Wildflower Society Branch and developed a regional herbarium. Although she had not been formally trained, the rigour of her method of collecting and recording gave the collection a scientific integrity that led to a partnership with the State Herbarium, now coordinated by the Department of Conservation and Land Management (CALM), where more than 7,500 of her collections are now housed.

"I have always had a garden and I had a little business called the Garden Florist over the telephone. When I shifted to the Albany airport in 1961 I had to have a garden there, so I thought I will have a wild flower garden because I can remember the airport before it really was a proper airport and it was just a field of flowers - it was beautiful. So I used to go over to the back of the airport, very carefully remove little plants and plant them in the beds. They all died, so I decided I had to do it properly: I had to really learn about these flowers so I could grow them, and I started pressing flowers. Dr John Beard came to the airport one day, and I said to John, "Will you help me with these names?" He helped me a bit and said, "Eileen you must not stop doing this - there are no plans in this government to do any research into the Albany region until 1995. Because you are so interested in wildflowers, how about you convene a meeting to form an Albany branch of the West Australian Wildflower Society".
Well, I did this, not expecting very many people, and nearly 40 people turned up and we went on from there. That was 1963."