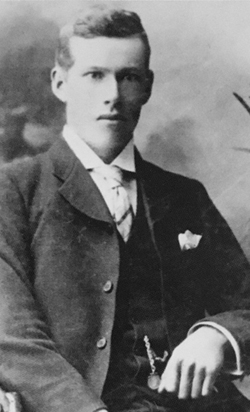 Thomas Dick's grandfather had settled in Port Macquarie on the NSW north coast in 1841 after migrating from England. Thomas remained in the area all his life.

Thomas, like other members of his family was an oyster farmer, or 'culturist', to use the term of the time. He was very knowledgable in this field and it gave him access to the scientists of the Australian Museum and State Fisheries in Sydney. His interests in natural history, in local history, and in the culture of the region's Aboriginals were intense and all-embracing. Photography provided a medium for illustrating his ideas; he left a magnificant visual record of Aboriginal life in the Hastings district.

Dick's photographic record survives only in fragmented form. Several museums and libraries hold print collections, two have sets of surviving glass negatives, while some negatives and prints were still with members of the family in the 1980s. In the 1940s the Australian Museum aquired a substantial number of his negatives portraying Aboriginals.

There are 280 known surviving photographic prints or negatives.

Dick had a close relationship with botanist R.T. Baker, Curator of the Technological Museum (now the Powerhouse) in Sydney, and Baker refered to Dick's observations in a 1915 paper on mangrove ecology. Dick published one paper on Aboriginal shield manufacture in the Proceedings of the Royal Society of NSW and was elected as a member of that Society in 1915, although he resigned in 1923.

I went into the mountains with them, gained their confidence and their secrets connected with their laws, and in some instances the information was only given with the understanding that it would only [?not] he published until after death.

I was fortunate for some of the old men were most intelligent and they recognised that their race was run, as it were, so they gave me under the conditions named, the history of their race.

Now by these means I secured all of the marks on the sacred trees, and their meaning, all of the rules of the ‘Waipara’ or man making ceremony.

In all their doings these primitive people followed nature, and when the whole is written a very interesting record will be made available to those interested. I do not known when I will bring out the work for I am now too much handicapped . .. "