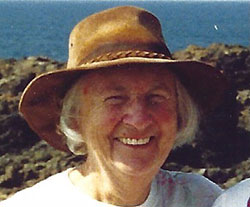 Mary Hancock was born in or near Fairfield and grew up in the western suburbs of Sydney. She married RAAF leading air craftsman Harold Hancock in 1945 who later worked for the Forestry Commission Headquarters and whose father and two brothers also worked for the Forestry Commission supervising forest usage in the Batemans Bay district on the south coast of New South Wales. Holidays were generally in and around the forests of Batemans Bay where Mary gained a love of the Australian flora.

When her sons Peter and Geoffrey had got older, Mary worked at a local nursery which complemented her interest in plants. After her husband Harold died in 1978, Mary moved to Nowra where she became involved in the local plant group and met like-minded plant enthusiasts developing the local Eurobodalla Botanical Gardens. At this time she began taking trips around Australia by bus to see the wildflowers in Western Australia and many other places with interesting flora and fauna. From these many trips Mary became knowledgeable about where plants occurred and when they would be flowering, so much so that Bert Bolton Tours offered her a position as tour guide. During this time Mary made connections particularly with the Western Australian Herbarium in Perth and the National Herbarium of New South Wales in Sydney, developing botanically productive associations with these institutions as well as friendships with botanists in the process. On her trips, Mary photographed and recorded much of the flora, collecting plant specimens for identification. In the 1980s and 1990s she visited many remote and restricted-access areas, finding interesting plants to science. She often asked botanists about taxa they were researching and happily accepted requests to search, photograph and collect plant specimens for taxonomic investigations. Many experts from various herbaria assisted with plant identifications and names for photographic slides, including, just to name a few, Greg Keighery, Paul Wilson (daisies), Bob Chinnock (Eremophila), Peter Wilson, Peter Weston, Bruce Maslin and Phillip Kodela (Acacia).

Mary Hancock took c. 17,000 photographs of Australian native plants in every state and territory and many islands, mainly between 1970 and 2010. The majority of the photos were from her trips around Australia with Bert Bolton's Outback Tours, as well as numerous plant group bus tours and private trips with friends. A significant resulting legacy is a database of over 5000, often vouchered, photographic images of plants available for public viewing on the University of Western Australian site of the Kwongan Foundation of which Mary was made an Honorary Patron https://www.facebook.com/kwonganfoundation/. Many images were also donated to the Australian Plant Image Index and various herbaria and government departments for scientific research and educational purposes, including floras and identification tools like the App WATTLE.

Mary's interest and keen eye for plants meant some significant collections, including fertile material useful for describing new or poorly known species. Mary's specimen collections and photographs have contributed to taxonomic research and plant identification, being cited in and illustrating various papers and floras.