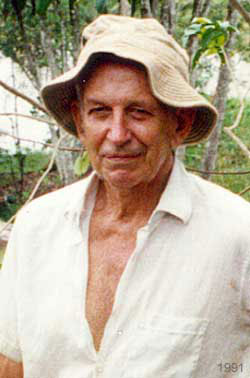 E.E. (Ted) Henty, noted for his work in the Papua New Guinea National Herbarium (LAE), died aged 85 at East Keilor, near Melbourne on 23 February 2002 after an illness of 6-8 months. Those dealing with New Guinea plants will know of his extensive collections in the NGF and subsequent LAE series from all over the country. The new Composite genus Piora from the alpine grasslands on Mt Piora was just one discovery made in 1963 with Sherwin Carlquist.

Those who knew Ted will consider him a fine field botanist, arguably one of the finest that has worked in Papua New Guinea. Not one to involve himself with revisionary studies, he was more concerned with the dissemination of floristic, practical and economic knowledge to the wider user. He preferred to call himself a "didiman" (agronomist). He specialised in grasses and weeds, logical as his home life surrounded the farming of cattle and growing tropical fruit up the Markham Valley from Lae. Nevertheless, his knowledge of the broader flora of Papua New Guinea was vast.

Ted first went to Papua New Guinea in 1949*. He had joined the staff at LAE by 1957*, soon deputising for John S. Womersley, an Assistant Director of Forests in his role as head of the National Herbarium and Botanic Gardens at Lae, and then for Michael Galore in 1976* soon after attainment of independence for Papua New Guinea when Womersley retired after almost 30 years as head. Michael Galore retired in 1983* and Ted became Assistant Director at the time of a major crisis of loss of financial support and staff for the institution. This drew international expressions of support to the Prime Minister and his Ministers. Ted retired in late 1984* with the institution resourced though still inadequately. In November 1986* he moved to a property in north Queensland, before moving closer to his son in Melbourne late in his days when his health deteriorated.

Ted was a true gentleman in every sense of the word. He treated Papua New Guineans and expatriates honestly, fairly and with great compassion. He was a "wantok tru bilong olgeta". Ted was unequalled in Barry's experience as a non-indigenous speaker and writer of Melanesian pidgin. He combined these language skills with compassion to resolve some potentially very serious conflicts between the garden laborers and management at the Lae Botanic Gardens. These conflicts involved bows, arrows, axes and bush knives (modern managers have it easy!). Ted's management style is best summarised by his response of "I don't see why not" to most proposals - a contrast to the man he deputised for, but that is another story.

Ted was a great-grandson of Stephen Henty, one of Victoria's famous Henty brothers who settled the Portland area early in the 1800s. His full name Edward Ellis Henty perpetuated that of his father who died in Anzac Cove, Gallipoli on 7 August 1915. It was later in that year, in October, that Ted was born. A photograph of Ted aged 85 appeared with an article entitled "Father I never knew" in the Victorian newspaper Herald Sun Weekend**.

Barry Conn and Bill Barker both first met Ted in August 1974 when taking up appointments as Botanists at the Lae Herbarium. On Barry's first day, after a brief introduction to the Herbarium and staff , Ted and he headed out for the day in the Sankwep logging area with about 30 students from the University of Technology. At the end of the dirt road Ted proceeded in his quiet voice to instruct these students in the art of tree identification. Shortly after beginning his lecture, a tropical downpour started with a vengence. Unperturbed and apparently unaware of the drenching rain, Ted continued to instruct the students, who gathered closer to hear him over the noise of the rain and huddled over their notebooks in an effort to keep them dry. This scene remained unaltered for almost an hour until Ted finally suggested, as if he had just noticed, that they all could return to the safety of the bus. Thirty totally saturated students sat inside the bus, in pools of water for 15 more minutes while Ted completed his lecture.

With John Womersley away, Ted threw Bill in the deep end by sending him to the Talasea-Willaumez Peninsula area of New Britain with Artis Vinas for a fortnight's botanising. Almost all conversations were in pidgin.

The ability to identify trees is an essential skill that all tropical field botanists must have. Particularly vital in the tropics is an ability to readily identify harmful plants. Ted was highly sensitive to species of Semecarpus (Anacardiaceae), requiring medical assistance whenever he was exposed to them. He advised Barry to avoid unnecessary contact with this genus. Who better to ask to learn how to identify them but Ted, Barry thought. Unfortunately, Ted would never take him closer than about 150 metres from the trees growing in the Lae botanical gardens. Barry never learned to recognise their diagnostic field characteristics. Consequently, because of Ted's lack of critical instruction, he too developed an ever increasing sensitivity to these plants!

Ted had a dry sense of humour. Bill remembers being told that as a young Aussie Rules rover his method of contending with giant ruckmen at the bounces was to stand on their feet. Ted also chuckled as he told him how he truncated one of his fingers while assembling a batch of LAE wood samples using a electrical planer at Lae Technical College. Concerned with stemming the excessive bleeding, he forgot to take the finger with him to hospital and lost all chance of a reunion with it when his assistant returned with the wood samples rather than the severed member. Jim Croft remembers how Ted thought he had been doubly hard done by as his fingers were already too short. He also remembers the humble side of his humour; Ted saw himself as hardly an expert in animal husbandry - his role was simply to ensure the grass was there, the cattle did the real work by grazing the stuff.

Each working day we were reminded of the gentleman in Ted with his ritual of driving Sue Osborn, the Secretary to the Assistant Director, in his little white Datsun sedan to the entrance of the herbarium. He would most genteelly offer his hand to assist her from the car, gather her baggage from the rear and take both his charge and her accoutrements through the front door and up the stairs to her office, before returning to take the car on to its park.

Tropical botany has lost a genial, generous and knowledgable man.