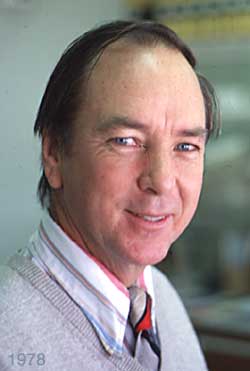 Bob was born at Newmarket, Brisbane to parents Leonard and Lotti-Rose. It is reported that as a boy he developed an early interest in morning glories in the back yard of his home. This laid the foundation for his focus on botany and the family Convolvulaceae later during his professional career, among many other things.

He attended Brisbane Grammar School and achieved academically and on the sporting field. However he was reluctant to display any signs of his achievements, to the extent that his parents would find award certificates in his wastepaper bin. This manifestation of his humility and a focus on the other person, would remain throughout his life. He was so tuned in to what other people were saying to the extent that he became more interested in their accounts than they were themselves.

He joined the Qld Dept of Agriculture & Stock (later Qld Dept of Primary Industries) as a cadet in 1948, while studying part time for a BSc in botany and soil science at the University of Queensland. He graduated in 1953 and was appointed botanist at the Botany Branch and Queensland Herbarium, where he worked on many research projects before embarking on the ecological survey of brigalow lands.

Bob earned his nickname 'Brigalow Bob' when undertook the brigalow survey from 1958 to 1962. He inspected every accessible patch of brigalow in the state and visited many landholders who had never seen a QDPI officer on their properties. Bob developed strategies for the clearing of brigalow country, prevention and control of brigalow regrowth and sound agricultural and pastoral systems. This underpinned Queensland's best land development scheme: the Fitzroy Basin. Bob was instrumental in the selection and establishment of the Brigalow Research Station at Theodore to conduct research to support the brigalow scheme.

He met his wife Toni at the Herbarium in 1959 and they married in 1962. Later that year he was appointed Officer-in-Charge of the newly established Brigalow Research Station, where the family moved with their first child. He completed his MSc on the ecology of brigalow in 1963.

The Johnson family moved to Logan, Utah, USA for four years in 1970 for Bob to undertake his PhD in multivariate methods for the analysis of botanical data under David Goodall, on a scholarship from the Australian Wool Board. When Bob returned to Australia in 1974 he was appointed Assistant Director, Botany Branch (Queensland Herbarium) to Selwyn Everist, succeeding Selwyn as director in 1976.

Bob was a multi-skilled botanical scientist and his expertise extended over many areas. His main interests were the ecology and control of brigalow (Acacia harpophlla), the design and maintenance of databases, a taxonomic specialist in the morning-glory family Convolvulaceae (in which he described 28 new taxa), a talented manager of research institutions and scientific staff and the conservation of plants and animals.

He published widely in all these fields more than 90 publications. These include scientific papers, books and book chapters in ecology, taxonomy,
biographical, managerial, weeds, conservation . He collected widely with 5000 herbarium specimens from throughout Australia and 4000 from Queensland.

He is recognised by the following Queensland species that were named in his honour: Acacia johnsonii, Commersonia johnsonii, Paspalidium johnsonii, Psydrax johnsonii and Solanum johsonianum.

He had a major role in the early stages of databasing the 600,000 specimens of the Queensland Herbarium (HERBRECS), at that stage being only one of two major world herbaria to have databased their label information. During his 14 years as Director, the three volume Flora of South-eastern Queensland was published (Fig. 2), as were a number of vegetation surveys and mapping reports.

Bob's managerial skills were widely recognised by his being appointed Officer-in Charge of the Agricultural Research Laboratories at Indooroopilly (1984-1990), and by his position as presidents of two Australian scientific societies (Royal Society of Queensland (1981- 1982) and the Ecological Society of Australia (1985-1986). He was also instrumental in the founding of the Federation of Australian Scientific and Technological Societies (FASTS) (board member 1986-89) to improve the profile of scientists in Australia. He was also an active member of CHAH (Council of the Heads of Australasia Herbaria), ASBS (Australasian Systematic Botany Society), the Bridled Nailtail Wallaby Recovery Team, the Scientific Advisory Committee for the Nature Conservation Act, Chair of the Protected Plants Management Advisory Committee and Chairman of Public Library Review Consultative Committee (1991).

He continued to work on his projects at the Queensland Herbarium for the 22 years since his retirement, often coming to the Herbarium a couple of days a week. He had 17 unfinished projects upon retirement, and although he has completed some of these, he did commence others. He was so regular he would ask management if he could take leave to go on overseas trips. His dedication to thorough ecological scientific research is reflected in the continual monitoring of a transect of his 'beloved' brigalow woodland at the Brigalow Research Station for 46 years, the last of which was undertaken during a heatwave a couple of years ago.

On the taxonomic front work was continuing on the study of Australian Convolvulaceae and at the time of his death there were still loans arriving from other herbaria to be studied by Bob. Bob will be best remembered for his contribution to the Queensland Herbarium, and for passing on its traditions and adding to them.

Bob was a kind and considerate person who had many talents - his upbeat, positive, cheerful, encouraging, energetic approach to life and botany, his mentoring and willingness to share his wealth of knowledge, including invaluable advice to all the exotic places he and Toni visited in recent years. He had a wide knowledge on many things and would readily discuss with enthusiasm subjects ranging from Australian Rules Football to the intricacies of a Mahler symphony.