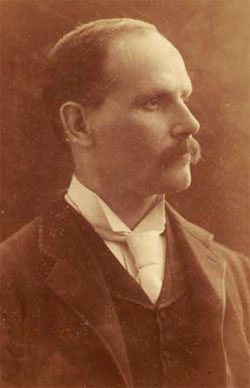 He was one of nine children, his father being the Rev. Henry Torrens Kenny. He qualified as an apothecary and surgeon in 1881 and 1882 in London. He arrived in Melbourne aboard the S.S.Hankow on 28 January 1889.

He opened his own medical practice in Hawksburn, Melbourne in November 1889. He sold this practice in 1896 and moved to Coolgardie in WA, setting up a practice in Nannine. In 1898 he was doing locum work in Latrobe and Burnie in northern Tasmania. He then moved to north Queensland in 1898 and set up a practice in Mareeba. By January 1899 he was back in Sydney for several months. In July 1899 he commenced an eight-year stint as a medical practitioner in Gympie, Queensland, modernising the hospital with an X-ray machine.

It is evidently during his time in Gympie that Kenny first became interested in botany, commencing and maintaining a correspondence with F.M. Bailey.

He resigned from his position in Gympie in April 1907, spending some weeks in Adelaide before boarding the S.S.Patroclus bound for Britain where he undertook further medical training. In May 1908 he returned to Australia setting up a practice in the Sydney suburb of Mosman. In November 1908 he was appointed medical officer for the Lithgow zig-zag railway construction, but within two months he was a resident of Hobart, Tasmania, and practicing medicine there! By November 1909 he was installed at Glen Innes, NSW, where he lived until November 1911. From December 1911 to February 1912 he went on an extended holiday to north Queensland, collecting plant specimens from Cairns, Herberton, Kuranda, Lake Eacham, Mt Bellenden-Ker, Harvey's Creek and Mourilyan. During the period February to July 1912 he travelled around the Darling Downs, perhaps working as a locum. Kenny started practicing medicine in Nambour in August 1912, but in October his place of residence was listed as Gayndah and throughout 1913 he was employed at the Gaynah Hospital.

In August 1914, at the outbreak of World War I, Kenny volunteered for the Australian Navy, as a medical officer for the ships Upolu and Fantome. His navy travels included Rabaul in New Britain, New Ireland, Kavieng, and Fiji, but he did not see any action against German forces. From March 1915 he was the staff surgeon of the HMAS Cerberus base at Williamstown Naval Depot, Victoria.

In 1918 he returned to live in Glen Innes, NSW, and in January 1919 he purchased a practice at Crows Nest, near Toowoomba in Queensland. He died at Crows Nest in May 1927.

Kenny attended several natural history and science conferences in the later part of his life, was an active member of the Queensland Field Naturalists Society, and in a letter to the Sydney Morning Herald in 1911 he pronounced himself as a botanist.

Kenny made around 1170 botanical collections, the great majority are at BRI (1148). Of these three were collected at Rabaul, eight at Suva, 12 from Victoria, 15 from SA, 38 from Tasmania, 269 from NSW and the remainder from Queensland.

A far more extensive outline of Kenny's life can be found in the 2016 paper by Tony Bean referenced below.

Only 870 collections are listed in AVH, considerably less than the 1170 in the reference above.