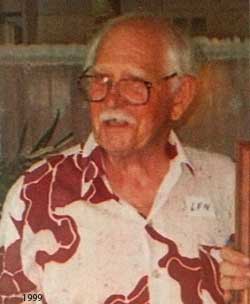 In 1984 Len Lawler made his mark in orchidology at the world level with his epic study titled Ethnobotary of the Orchidaceae. Len also produced some interesting historical research on orchid identities such as Jack Wilkie, Ken MacPherson, Claude Le Roy and Alf Glindermann.

In 1986 after retiring from the University of Sydney Biochemistry Department, Len moved to Atherton, and a few years later to Tolga. Len became very well known in Queensland running an Australian Orchid Foundation (AOF) sponsored project to catalogue and record the occurrences of rare orchids. He encouraged many local orchid enthusiasts including Lewis Roberts to study the native orchids of their area.

He collected the type specimen of Calochilus ammobius and of Gastrodia urceolata which he and Chris Godfrey found in the Herberton Range in 1988. It was later described by D.L. Jones in 1991 In 1966 Len discovered a small terrestrial orchid near Rossville south of Cooktown. This was described as Malaxis lawleri by P.S. Lavarack and B. Gray in 1984. It is now known as Crepidium lawleri (Lavarack & B.Gray) Szlach. It is considered endangered due to damage to its habitat by feral pigs.