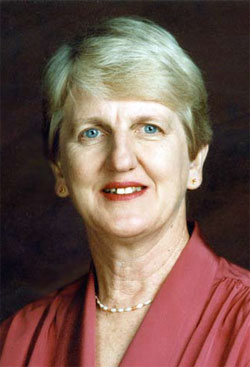 Born in Tocumwal, southwestern NSW, an important railway junction on the Sydney-Melbourne rail line, on 13 September 1933. She died in Canberra on 18 December 2015.

She was the older of two daughters of Neale McCusker and Mary Irene (née Magwick). Neale worked for the NSW Railways, and at that time had advanced to be a stationmaster. He later progressed to be the NSW Commissioner for Railways.

Alison's younger sister, Jill, became a notable expert in the health use of nuclear radiation, and was a commisioner of the Royal Commission into the British Nuclear Tests at Maralinga and elsewhere.

Alison's education was at St George Girls High School, followed by a science degree at the University of Sydney where she became a post graduate student and teaching fellow, researching chromosomes of Australian Ericaceae (Leucopogon and Astroloma species). She then moved to the University of New England as a lecturer in botany.

She moved overseas in 1961, joining the botany department of the University of Ghana in Accra, west Africa. Between 1963 and 1974 she was Associate Professor and head of the Department of Botany at the University of Dar es Salaam, Tanzania. There she completed her PhD, studying the "knee roots" that allow mangroves to thrive rooted in oxygendeficient mud.

After more than ten years in tropical Africa, health issues encouraged her return to Australia. In Ghana, Alison fostered a Ghanaian boy, Kwodjo, and raised him from four years old to adulthood, with the encouragement of his own family. Alison's link with Ghana continued throughout her life as she became patron of the Ghana Australia Association.

When a start was made to establish the Australian Biological Resources Study (ABRS) within the Commonwealth Department of Science, Alison was chosen to head the Flora Section from about 1975. Alex George joined her at ABRS as the first Editor of the Flora of Australia. The first volume was published in 1981, launched at the 13th International Botanical Congress in Sydney, the first time such a congress met in the southern hemisphere. By then Alison was Acting Director of the Bureau of Flora and Fauna of ABRS.

Alison's responsibilities widened; she became Assistant Secretary of the Commonwealth Department of the Environment Sport and Territories, heading the Environment Strategy Division at a time when there was much activity to recognise heritage values. Rainforests in north Queensland were among many areas successfully proposed for World Heritage Listing.

Around 1987 Alison moved to Rome and took on world-wide responsibilities as Deputy Director of the International Plant Genetic Resources Institute, a branch of the United Nations Food and Agriculture Organisation (FAO). After leaving the Institute in 1994 she returned to have a major role in preparing a report, "State of the World's Plant Genetic Resources", to the FAO in 1996.

From 1994 Alison was a Voluntary Associate Scientist, again at ABRS in Canberra, editing and writing parts of further Flora volumes, contributing several sections to the first of the Poaceae volumes and the second edition of the introductor volume 1.

In 2009 Alison was awarded a Medal of the Order of Australia in recognition of her service to science through "the cataloguing of the Australian flora" in the Flora of Australia.