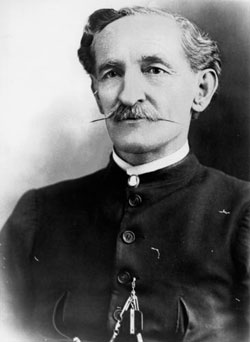 He migrated to Australia in 1859 and grew up at Ulmarra on the Clarence River, N.S.W. In 1889 Meston was appointed leader of the Queensland Government's expedition to the Bellenden-Ker Range of north Queensland. F.M. Bailey was the botanist who discovered a large number of previously undescribed species at that time. Meston was a journalist between 1876 and 1881 and as a result he wrote on the expedition.

In 1894 Meston was appointed a Special Commissioner of Police to prepare schemes for aborigines improvement and in 1897 he was appointed Protector of Aborigines for south Queensland. As part of his many duties Meston visited central Queensland between 1900-1906. He was one of the first officials to visit Great Keppel Island in August 1900. Queensland Herbarium records show that he did some plant collecting in the vicinity of Rockhampton in August 1906. He is commemorated by rare species of Garcinia mestonii F. Bailey and Piper mestonii F. Bailey which occur at Bellenden Ker.