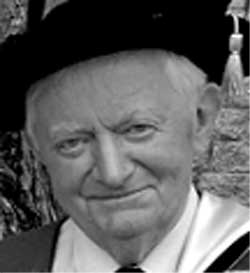 He was educated at The Worshipful Company of Skinners School at Tunbridge Wells. Dennis served in the British and Indian Armies from 1942 to 1947 before migrating to Australia in 1950.

In 1961 Dennis joined the Tasmanian Department of Agriculture. In his position as Weed Officer, he became familiar with Tasmania's introduced flora, a familiarity that soon developed into an expert and unique knowledge. Whilst in this position, Dennis wrote and illustrated handbooks and educational material on weed-related subjects. He contributed directly to documenting the weed flora in Tasmania, and provided botanical advice to the extension services operated by the Department of Agriculture. Dennis retired from the department in 1985.

In the early 1960's, whist working for the Department of Agriculture, Dennis met Dr Winifred Curtis. Their shared interests in plants developed into a close friendship and a productive scientific collaboration in preparing the Student's Flora of Tasmania, the definitive handbook of the flowering plants and conifers of Tasmania. They published a revised edition of Part I in 1975. Through his work on the Tasmanian native flora, Dennis became a highly skilled and greatly respected taxonomist. He discovered and formally named many Tasmanian taxa, and contributed to the description of others for colleagues in other herbaria. He also became fluent in the formal aspects of botany and plant nomenclature, and continues to provide advice to others in this area. His publications and those of his colleagues were invariably illustrated with high quality, ink drawings and examples of his artwork are displayed in the Tasmanian Herbarium building on the University of Tasmania's Sandy Bay Campus.

On the 30th January 1985 Dennis was appointed as an Honorary Botanist at the Tasmanian Herbarium. In 1994, Dennis completed Part 4B of The Student's Flora of Tasmania (with Dr Winifred Curtis). This documents Tasmania's monocotyledon flora (excluding the orchids). In his honorary capacity at the Tasmanian Herbarium, his taxonomic expertise in the monocotyledons, in particular the grasses and sedges, continued to be used by a range of Tasmanian Government agencies including Nature Conservation Branch and Weeds Section, Parks and Wildlife Service, and also researchers in Geography and Plant Sciences at the University of Tasmania. His experience in the identification of introduced plants was continually sought by a large number of government departments and individuals. He also provided advice of a quarantine and forensic nature to AQIS and the Police Department, and his unrivalled status as an outstanding botanist was often called upon in legal matters. In his final years he continued to work on updating the Student's Flora of Tasmania, while providing a world-class weed identification service.