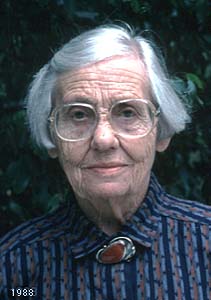 Came to Tasmania in September 1939, and almost immediately joined the Biology Department of the University of Tasmania, only the second woman to be appointed to the University staff. In 1945 she was a foundation member of staff of the Botany Department, eventually rising to the position of Reader, with several periods as Acting Head of Department.

Her initial research on chromosome numbers (Dianella, Pultenaea) revealed the first reported case of polyploidy in the Australian flora (Pultenaea juniperina). In 1945 she began writing The Students' Flora of Tasmania as an aid to her teaching duties, and this task has continued until the present day, with a second edition underway. From 1967-1978 she contributed the text for the six volumes of The Endemic Flora of Tasmania, for which Margaret Stones prepared the plates. On retirement in 1966, she continued to take an active interest in the Tasmanian flora, and was instrumental in the establishment of the present Tasmanian Herbarium in 1977.

Thirty years after retirement, Winifred is still visiting the herbarium several times a week, working on her Students' Flora. Since 1970 she has been assisted in this by Dennis Morris. In 1991 the Royal Society of Tasmania published a commemorative volume to mark her 85th birthday (see below). Her main herbarium collections are housed in HO, with a substantial number of duplicates in K. Other duplicates are to be found in AD, CANB, MEL, NSW and some other herbaria.

Winifred celebrated her 100th birthday on 15 June 2005. To celebrate this significant milestone, staff of the Tasmanian Herbarium (HO) and the University of Tasmania put together an exhibition on Dr Curtis' life entitled 'Dr Winifred Mary Curtis: 100 years of botanical research'. She died in Hobart at the age of 100 on 14 October 2005.