that grows out from a bulbous foot embedded in the thallus is entirely spore capsule. To see the foot you need to dissect the hornwort. The immature sporophyte is green and so, like the immature moss sporophyte, photosynthesizes.

A liverwort or moss capsule comes to a definite stop in its development, with the spores having all matured together. The capsule then opens in some way to release the spores. In the hornwort genus Notothylas the sporophyte also has a determinate period of growth. By contrast in the other hornwort genera the sporophyte is continually growing from near the base. In theory such a sporophyte could grow indefinitely, though the death of the aging thallus or changes in environmental conditions eventually put a stop to sporophyte growth. Technically the near-basal area in which there is continual cell addition is an example of a meristem. Meristems are found in all plants for all plant growth is via meristematic tissue of some sort. The apical cell, mentioned in the introductory LIFE CYCLE page is an example of a meristematic cell.

of a species of Megaceros shows some involucral remnants quite well.

Given that the oldest cells in the sporophyte are near the apex it is in the apical region that the first spores mature. Then the spores a little lower mature and so on. In this photo the majority of sporophytes are brown in the upper region and green below. The spores in the brown areas are approaching maturity but in the green areas spore development is at various earlier stages.

shows a cross section through the lower, still green region of a hornwort sporophyte. The yellow-green cells forming a ring around the centre are the sporogenous cells that will give rise to spores as well as the pseudo-elaters. Between the sporogenous cells and the sporophyte surface are the chlorophyllous, photosynthesizing cells. The photo (right) is of a cross-section of the upper part of a hornwort spore capsule that has started to turn brown. You can see that the outermost cells now have a brownish tinge. Where the previous photo showed sporogenous cells there is now a mass of dark green cells – a mix of mature spores and pseudo-elaters. Here

are some spores and pseudo-elaters. 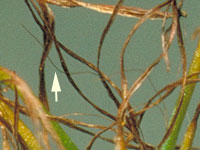 Along the hornwort sporophyte's central axis there is a column of sterile tissue called a columella. This is thought to be a conducting system that helps supply nutrients to the developing spores. When you look at a group of open sporophytes it's easy to see the capsule segments but amongst them you'll find the columellas, thinner and wiry in appearance. If you use a handlens to look closely at mature sporophytes such as the ones shown in this earlier photograph

you will be able to see columellas amongst the split capsules. The columellas are markedly thinner than the sporophyte segments. On the left is an enlargement of part of that previous photo and the arrow points to a columella.