In those liverworts with a seta the seta elongates only when the spore capsule has matured, quite the opposite to what happens in mosses. Liverwort setae elongate by cell expansion and so are fairly flimsy. They are also colourless as shown by this photo

Apart from calyptrae you can find a variety of other protective coverings over the young sporophytes. Perianths are found In the leafy liverworts and result from the fusion of two or three leaves around the archegonium. The group of plants in this photo 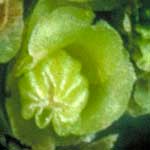 Here (left) is a closer view of one of the perianths from the last photo. Hidden within the perianth is the embryonic sporophyte within its calyptra. Perianths vary in size, shape and pleating and help to identify species. An expanding sporophyte would push through a perianth and leave a tubular remnant around the base of the seta. You can see that in the painting at the top of this page. The bulbous green cylinder around the base of the pale seta is a perianth. In this case the perianth is rather smooth.

There are also fleshier protective tubes or pouches that may be formed from stem tissue in leafy liverworts or thallus tissue in thallose liverworts and sometimes in combination with archegonial tissue. Given the variety of ways in which the tissues in these structures may develop, there is a variety of names for them: caulocalyx, coelocaule, involucre, marsupium, perigynium, pseudoperianth, shoot-calyptra and stem-calyptra. It is worth explicitly mentioning that where a protective structure is formed by the fusion of the archegonium with other tissue there is naturally no separate calyptra. For the purposes of this website it's sufficient to know these are protective structures but it is not necessary to go into the precise definition nor tissue composition of each. If you are keen to find out more you can use those terms in an internet search engine or consult the books listed in the next reference button. Be warned, you may find slight differences in definitions between different sources

shows a sporophyte of the thallose liverwort Symphyogyna podophylla at the point where the seta has begun its elongation and has forced the mature, black spore capsule beyond the shoot-calyptra. You can see the ruptured end of the shoot-calyptra just a little below the bottom of the spore capsule. The seta still has a long way to go. The shoot-calyptra of this species is often reddish in colour and the next photo

shows one, with the collapsed seta of a mature sporophyte clearly visible. In this photo

you can see the mature, black spore capsule of the thallose liverwort Aneura alterniloba. The seta is in the process of elongating but the sporophyte is still contained within its shoot-calyptra. Here

are two shoot-calyptrae of Riccardia wattsiana. The associated sporophytes have already expanded, shed their spores and collapsed. You can see what looks like a thin, white thread coming out of one of the shoot-calyptrae. That "thread" is actually a seta that has already collapsed.

The spore capsules of the thallose liverwort Targionia hypophylla are produced at thallus apices and are contained within protective, blackish involucres. The involucre is bi-valved, with the margins firmly pressed together until the spores have matured. Then the involucre opens to expose capsule and spores. In this photo

you can see several open involucres.

The photo (right) shows several spore capsules of the thallose liverwort Fossombronia pusilla in various stages of development. They would eventually be raised on setae but at the time the photo was taken the setae had yet to elongate. The brighter brown capsule on the right has probably been damaged and has failed to develop. You can see some damaged, discoloured thallus around it. There are three mature, blackish capsules in a slight arc. The rightmost (near the failed capsule) has a slightly cloudy appearance and the leftmost of the three is partly covered by a cloudy film. The cloudy areas indicate calyptral remnants. The rightmost of the three is still covered by its calyptra. The calyptra over the leftmost is breaking off. The capsule in the middle of the arc of three is largely free of its calyptra. Below that middle capsule you can see a very immature green capsule. This photo

also shows a species of Fossombronia. You can see some calyptral remnants on the spore capsules. Each of the two capsules is sitting within a cup of green thallus tissue. Those cups are the caulocalyces. Here

are mature but still unopened capsules of a Fossombronia atop setae at various stages of expansion, with the cup-like caulocalyces at the bases of the setae.

of the thallose liverwort Sphaerocarpos texanus shows numerous involucres, each with an apical hole. The next photo

shows a closer view, with a couple of involucres broken open to reveal the immature spore capsules inside. An involucre-laden thallus of Oxymitra incrassata presents quite striking pictures (below). This species has not been found in Australia and the photograph was taken in Uruguay. The species is known from North and South America, Europe and north Africa.

A number of thallose liverworts produce their sporophytes in umbrella-like structures. An example is the genus Marchantia

is a differently shaped "umbrella" top from a different species of Marchantia. Each such "umbrella", or archegoniophore, is not itself a sporophyte but is in fact gametophyte tissue. The part of the "umbrella" at the top of the stem is called the female receptacle or carpocephalum. The receptacle is initially on the thallus surface and the stalk grows to raise it. The archegonia are found on the female receptacle and initially they are in the upper surface and face upward. They are fertilized when the stem is still fairly short. The stem continues to grow and the receptacle continues to grow by centrally added tissue. This moves the fertilized archegonia outward and the receptacle eventually folds over to orient the developing sporophytes so that they face down. The following stylized diagram shows three stages in that process with the coloured dots indicating the positions of six archegonia.

A number of sporophytes develop under each receptacle and each sporophyte has a short, robust seta. In this photo

you see a closer view of an archegoniophore with several mature spore capsules. Each fluffy, yellow mass is a mix of spores and ELATERS that has been exposed upon the rupture of a spore capsule.

The accompanying diagram (right) shows a cross-section through an advanced, but not yet open, Marchantia sporophyte, attached to the underside of a receptacle. The large cells, left uncoloured, at the top of the diagram constitute part of the receptacle. The red area indicates the foot that anchors the sporophyte to the gametophytic tissue of the receptacle. Blue indicates the seta and below that is the spore capsule filled with spores (orange-brown) and ELATERS (black). The long, grey "fingers" that hang down around the sporophyte indicate the perigynium, a fleshy sleeve that initially surrounds and protects the young sporophyte. The diagram is a coloured version of figure 3 in plate 19 of Agnes A Brewster's Botany for Australian Secondary Schools, published in 1929.

Don't confuse the archegoniophores with the raised antheridial pads

in which the sperm are produced. Spore capsules do not develop on the undersides of antheridial pads.

indicate such receptacles. The receptacle remains on the thallus surface until the receptacle's sporophytes approach maturity. Then the stalk elongates rapidly to raise the advanced sporophytes. Here

is the archegoniophore as the stalk is starting to expand. You can see the receptacle just clearing the formerly enveloping scales. A little later

you can see the stalk and also make out a couple of black spore capsules through the almost translucent, green receptacle. The stalk continues to extend and this photo

shows a number of thalli with fully expanded archegoniophores and here

is a more drawn-back view. 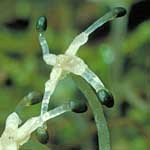 The sporophytes grow out from the receptacles, now seen as white crosses. This photo

you can see several Reboulia hemisphaerica archegoniophores with mature spore capsules. There are several smooth, blackish, unopened capsules as well as a few that are open, with the spore and elater masses visible. Here

is a colony of the thallose liverwort Asterella drummondii, with numerous archegoniophores visible. The next photo

shows a couple of mature archegoniophores with white pseudoperianths clearly visible. An Asterella pseudoperianth is initially a tubular sheath over the sporophyte. As the sporophyte matures the tubular sheath splits lengthwise into a number of segments which remain joined at their tips for a while but eventually the segments break free at their tips.