The special case of Korthalsella

The most striking exception to the general pattern of continental distribution in mistletoes is the genus Korthalsella. In all Korthalsella species the leaves are reduced to scales, and the stems are commonly flattened (cladodes)

. In most species plants are less than 10 cm tall, and resemble sucker-like outgrowths of the host stems. Species delimitation in the genus is difficult: early authors recognized about 30 species, but in one more recent study only seven species were recognized. The true situation is probably an intermediate one, with about 14 species in the genus.

In terms of geography, these species fall into two distinct groups (below). About half of the species occur on major land areas, as a group ranging from Australia and New Zealand northwards through Indonesia to southern Asia and westwards into inland Africa (green). The other half of the species are found almost exclusively on remote islands, as a group ranging eastwards across the Pacific as far as Hawaii, and westwards across the Indian Ocean to Madagascar and nearby islands (red). Thus Korthalsella is by far the most widely dispersed mistletoe genus over oceanic islands. 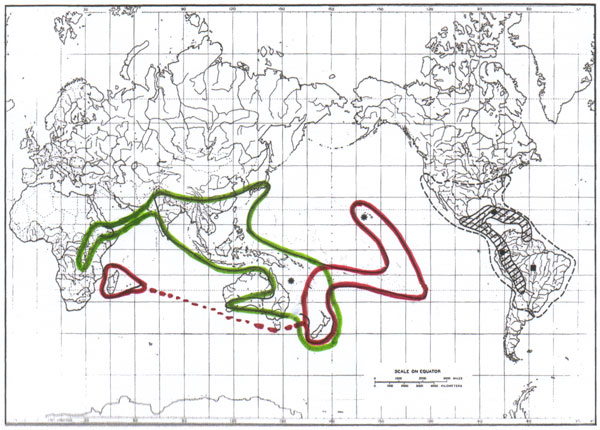 As described above, Korthalsella seeds are minute

and weakly explosive, and may be dispersed on the plumage and feet of birds, which gives us a clue to the two distinct geographic patterns in the genus. It has been suggested that when a perching bird touches a Korthalsella plant the ripe fruits may be triggered, ejecting the sticky seeds on to the bird. The pattern of dispersal is presumably determined by the movement of the available birds. Korthalsellas of tropical and temperate forests would be dispersed by birds which move through these communities; hence the continental distribution pattern of the first species group, from Australia/New Zealand as far as Japan.

The distribution pattern of the second group of species, across remote islands, conforms with the movements of sea birds such as boobies and tropicbirds, which range widely over sea, nest on islands, and rarely visit the mainland. It seems likely, therefore, that these Korthalsella species are dispersed by such sea birds, and their combined range is largely restricted by the movements of their maritime dispersal agents.

Hitch-hiking korthalsellas can only go where their carriers go!