Depth of field — a simple outline

Depth of field is the term to describe how much of the photo, at varying distances from the camera, is in focus.

Depth of field is determined by the aperture setting on the lens (unless you use new techniques of splicing multiple images together).

The aperture is the adjustable hole in the camera lens through which the light passes to reach the camera's sensor (or the film on older cameras).

When that hole is very small, the light passes only through the central part of the lens with minimal distortion, and much more of the image is in sharp focus.

When the hole is very large, the light passes through a much larger area of curved lens and the distortion is greater, only a narrow plane of the image is in sharp focus.

There is a link between aperture and shutter speed.

If the 'hole' in the lens is smaller, it will take longer for the correct amount of light to get to the receptor or film to correctly expose the image.

The 'correct amount of light' in the rough diagram below is represented by the area of the shaded rectangle.

As the aperture gets smaller, it must be left open for a longer period of time to to allow the correct amount of light to get to the receptor or film.
The length of time the light has to pass through the hole is the 'shutter speed', usually in fractions of a second.
But although they are correctly fractions of a second, they are usually marked on the camera as plain numbers: 1/60 = 60,   1/250 = 250   etc.
Thus 250 (1/250 second) is a much shorter time than 50 (1/50 second) 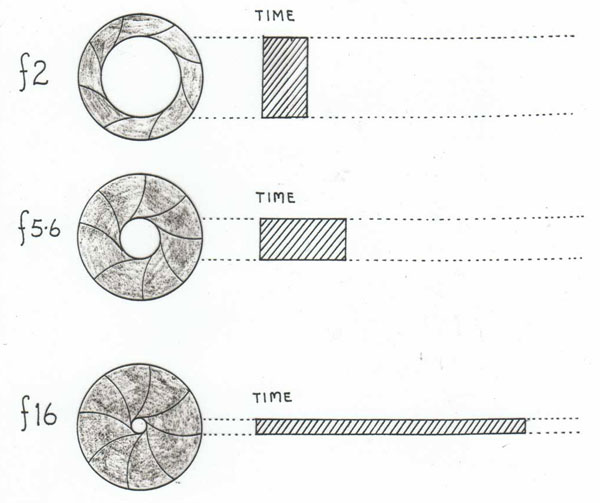 Thus on my Nikon D7000, all these combinations of shutter-speed and aperture for the same image will be correctly exposed:

So why not use the smallest aperture for the maximum depth-of-field every time ?