The terms 'stony downs' or 'gibber plains' are used to describe desert pavement in Australia. They are also called reg (in the western Sahara), serir (eastern Sahara), or saï (central Asia). It is a desert surface covered with closely packed, interlocking angular or rounded rock fragments of pebble and cobble size. Desert varnish can collect on the exposed surface rocks over time.

Strictly these are landforms rather than vegetation types, but for long periods of time, especially during drought, these plains are devoid of herbage and represent a de facto 'vegetation'. After rains they can transform into short-lived herbfields of ephemeral grasses, chenopods or daisies.

They are called 'gibber plains' after the pebbles or gibbers covering the surface. Gibber is also used to describe ecological communities, such as Gibber Chenopod Shrublands or Gibber Transition Shrublands.

Two major plains areas are well known for their stony character.
The Gibson Desert of the interior of Western Australia (map 5) carries a carpet of ferruginous stones derived from the breakdown of the ironstone that caps the mesas of the area. The Gibson was described by D W. Carnegie as 'a great undulating desert of gravel'.
Sturts Stony Desert, of northeastern South Australia and adjacent areas (map 8), is noted for its veneer of siliceous stones derived from the breakdown of the silcrete cappings that are preserved and marginal to it. The silcrete breaks down to produce fragments with a conchoidal fracture (that is, with concave faces), and the edges produced by the intersection of such faces are very sharp, so sharp that they played havoc with the hooves of explorer Charles Sturt's horses, and were much used by the Aborigines for making tools. The plateaux capped by silcrete are either flat-topped or slightly concave upwards. The bounding slopes are covered by coarse angular debris. As the slopes are worn back, this coarse material of purplish hue comes to rest on the plains. 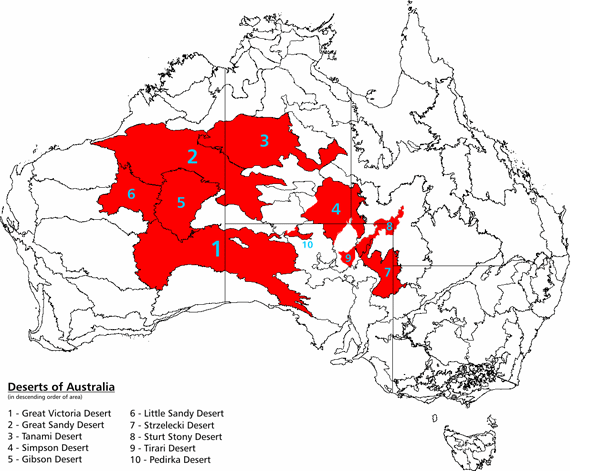