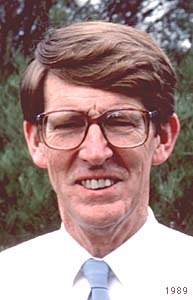 Robert studied forestry at the University of Sydney and the Australian Forestry School in Canberra. After graduating he worked with Professor Lindsay Pryor and Mr David Shoobridge in the Parks and Gardens Section in Canberra conducting research into Eucalyptus selection and breeding and urban forestry. In 1963 he was awarded a Master of Science degree from the University of Sydney for a research thesis examining how some species of eucalypts cope with waterlogged soil conditions while most do not. One aspect of this research established the importance of the root and lower stem systems in providing tolerance to waterlogged conditions. Species from dry sites grafted onto species from waterlogged sites survived when grown in wet conditions while species from wet sites failed when grafted onto species from dry sites and grown in waterlogged conditions. This use of grafting led to other trials to establish seed orchards of selected forms and to examine the the possibility of developing dwarfing rootstocks.

In 1968 Robert began a doctorate study at the Australian National University on the topic of the ecological effects of changing rural land usepatterns in the Canberra Region. He was awarded the degree of Doctor of Philosophy in 1971 before staring a new career in nature conservation administration in the Australian National Parks and Wildlife Service in Canberra.

In 1979 Robert was appointed Director of the National Botanic Gardens later the Australian National Botanic Gardens, and held this position until 1989 when he left the Australian Public Service and established a consultancy in conservation and natural resource management. While working in Parks and Gardens in the late 1950s and 1960s Robert had assisted Dr Erwin Gauba and others in collecting living material and herbarium specimens for the Gardens therefore to return as director was a privilege and challenge.

When asked to indicate the most significant administrative events for the long term future of the gardens during his period as Director, he indicated the decision, in the context of self-government for the ACT, for the Gardens including the extension south of Black Mtn Drive to become national rather than territorial responsibility. The most significant functional event was for the Gardens to add a conservation biology role to its existing functions of horticulture, education and interpretation and botanical science. The agreement of the Hon Tom Uren MP, Minister responsible for the Gardens, to prefix the name of the gardens with the word Australian was important for recognition of the institution in the international botanic gardens arena.

On 13 June 2005 the Australian National Botanic Gardens honoured Robert with a plaque unveiled in a celebration one week after his 70th birthday.

Robert died in Canberra early in the morning of Sunday 30 August 2009.