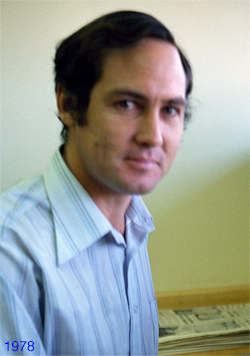 Clyde was born in Brisbane and graduated from the Australian National University with a degree in forestry. He worked for the Herbarium of the then Canberra Botanic Gardens (now part of CANB) from February 1968 until June 1970 where he made c.1,700 collections on field-trips in eastern Australia.
In July 1970 he took a position as botanist in the Northern Territory Herbarium in Alice Springs.

At the time of Clyde's arrival in 1970 Alice Springs was the location of the major herbarium in the Northern Territory, with Darwin having a minor regional collection. He worked in Alice with such notables as Peter Latz, John Maconochie and Des Nelson.

Within a couple of years he had the option for a move to Darwin. This was to take over the only botanical post in Darwin that was being vacated by Norm Byrnes. Unfortunately he arrived in time to experience Cyclone Tracey.

At the time Clyde moved to Darwin the flora of the Top End was perhaps the least known in Australia. There was no one who knew the Top End flora in a western scientific sense, the specialised plants of the western Arnhem Land Plateau were almost unknown and large sections of the Top End were uncollected. There were few specimens – only about 3,500 – in the herbarium, and the only major botanical reference works were Bentham's Flora Australiensis – about 100 years old – and Ewart & Davies' Flora of the Northern Territory, a work published in 1917 but largely based on Bentham's earlier publication.

Clyde devoted his working life and a good proportion of his spare time to improving this situation. Through his efforts, and of course those of interstate botanists and colleagues who subsequently joined him at the herbarium in Darwin, today our checklist of the NT flora lists approximately 4,400 species, a massive increase on the 2,700 species listed in George Chippendale's checklist published in 1971.

At the time Clyde took over the running of the herbarium in Darwin the combined total of herbarium specimens for Alice Springs and Darwin was a little over 40,000. At the time of his retirement (22 Dec 2000) there were about 220,000 collections in Darwin (DNA) and Alice Springs (NT), most of these being in DNA following the removal of the bulk of the specimens from NT in 1989. The general curation of these specimens had been Clyde's responsibility. The data-basing of the herbarium specimens in DNA and NT was commenced about 20 years earlier and it is thanks largely to Clyde's activities that we now enjoy the utility of a fully databased herbarium collection – an achievement that had yet to be realised in many other Australian herbaria in 2000. Two major reference works dealing with the Top End flora (Flora of the Darwin Region, Vol. 2 and Floodplain Flora) had been published under his leadership.

Clyde achieved a significant milestone of making over 10,000 personal herbarium collections – and many thousand more with the numerous colleagues that spent field time with him. No fewer than 39 of these collections are type specimens.