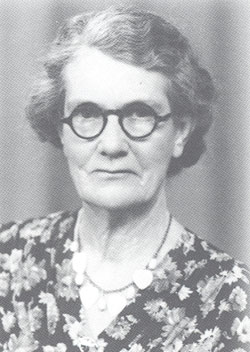 Ada Mary McLaughlin, botanical collector and grazier, was born in Somerset, England, daughter of Richard Norton and Mary, née Longman. Ada emigrated at an early age with her parents and grew up at Capella in Central Queensland where her father was a schoolteacher and later selector. Following her education at the Capella State School, Ada joined the Queensland Department of Public Instruction in 901. She taught first at Double Island Point and later in the Gladstone and Bowen districts before coming to Cardbeign State School, near Springsure, in 1907.

In 1912 Ada left teaching to marry a local farmer, Carson McLaughlin. The McLaughlins took up Buckleton, Springsure, which they worked first as a dairy farm (Ada milking up to 20 cows a day), gradually expanding to beef cattle and later sheep. Ada was, according to her granddaughter, 'a fair example of what a good bushwoman was expected to be'. She raised and educated her five children, coped with house and farm, developed a flourishing, garden and was a skilled horsewoman. She managed Buckleton herself following her husband's sudden death in 1941.

A keen observer of nature, Ada also found time to study local birds and collect plants, often in the company of her children and with Muriel Biddulph of Mount Playfair station. Her reputation as a botanical collector was such that people from all over the Springsure district, and beyond, brought specimens to her. In the years between 1929 and 1961 Ada despatched some 122 plant specimens to the Queensland Herbarium, establishing a bond of friendship with the government botanists C.T. White and later Selwyn Everist.

Ada McLaughlin was a regular contributor to local newspapers, for more than two decades writing weekly nature columns for the Capricornian and the Central Queensland Herald under the pen-name 'C.C.' (for 'Country Cousin'). In addition, she was founder and president of the Springsure Garden Club, a judge at local flower shows, and one-time president of the Springsure CWA.