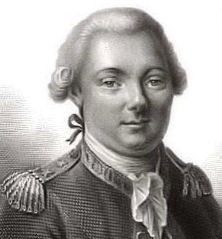 Commander of an expedition to the South Seas in the ships Boussole and Astrolabe which called into Port Jackson, New South Wales, a few days after the arrival of the First Fleet (1788). Shortly afterwards both vessels were wrecked on Vanikoro Island in the Santa Cruz group, the wreckage being discovered by the English Commander Peter Dillon in 1828. Their loss triggered subsequent, more successful voyages carrying French naturalists such as Gaudichaud, Labillardière, Leschenault and Dumont d'Urville.