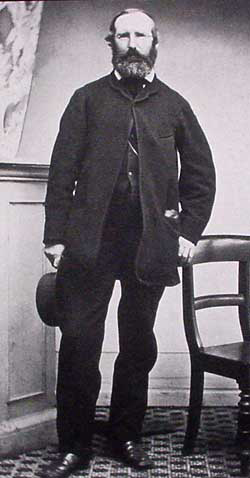 Migrated to Australia in the 'George Washington' 2 March 1849.

"DEATH OF DR. WEHL. - Our South-East readers will hear with regret of the death of Dr. Wehl, which occurred at Mount Gambier yesterday morning. The cause of death was hydatids. These, it appears, had developed on the lungs without being suspected, and spread over the outer coating of the stomach, producing symptoms which were at first mistaken for dropsy. It was only last week, on resorting to the operation of tapping, that the true cause of the disorder was discovered ; and the doctor's system was then so poisoned that his medical advisers had scarcely any hope of his recovery.

The deceased gentleman was by birth a German, but he has been long and intimately acquainted with Mount Gambier was, in fact, a resident before the town existed. He arrived here in 1849's a young man of about 25, having only a short time previously arrived in the colony from Germany. The country was then all in the hands of squatters. In the township there was only a slab public-house, owned by a person known as "Black Byng;" Mr. Crouch's store, and a blacksmith's shop ; and these buildings were erected on land belonging to the then owner of Moorak Station, Mr. Sturt.

Dr. Wehl practised his profession; among the few-and-far-between population of the district till 1852, when the fame of the Victorian diggings led him, along with the bulk of his patients, to try their fortunes on the gold-fields. In 1853, however, he returned and settled down again to the practice of medicine. - It would not be possible to write a biography of Dr. Wehl without at the same time writing a history of Mount Gambier. We shall, therefore, only briefly touch on one or two of the more prominent points of his career. He took a deep interest in all industrial pursuits. In 1857 he started the first flour mill in the district, which was driven by hand power. In 1858 he substituted horse power, and in 1859 he introduced steam. He continued in the milling trade till 1868. In 1858 he commenced farming, and up to the time of his death continued to manifest the deepest interest in agricultural pursuits. Some ten years ago he embarked very deeply, in the business, having purchased about 3000 acres in Gambier East. This did not turn out well, the land being very expensive to clear, and after all, too poor for cropping. This was the cause of heavy loss, and the farm was eventually abandoned. On his land in the vicinity of the town he carried out many interesting, experiments with grasses and root crops, of whioh the district reaped the benefit.

When a District Council was proclaimed here Dr. Wehl was one of the first members, and was elected first Chairman. He was connected with all the leading local societies - Oddfellows, Foresters, Masons, German Club, &c. Much regret was felt here when in 1874 he announced his intention of retiring from practice. He did so on the ground of failing health. On that occasion he was entertained at a public dinner, a friendly societies' dinner, and had presented to him a silver tea and coffee service and a purse of sovereigns. It may fairly be said that no resident in Mount Gambier ever commanded more respect or was better liked than Dr. Wehl. And he well deserved this. He was of a genial and generous disposition, and poor and rich were ever treated with equal consideration, both professionally and otherwise.

Dr. Wehl was married to a sister of Baron von Mueller of Melbourne, who survives him. They have had a family of 15 children, 12 of whom are now alive. He was 53 years of age. It is arranged that his funeral will take place to-morrow."