Vitricolous lichens are those that grow on glass. The term is derived from the Latin vitrum (glass) and cola (indicating inhabitant), so the word vitricolous literally means 'glass inhabiting'. The information from this page is taken largely from the two sources listed in the following reference button

Published observations of lichens growing on glass go back to at least 1831 when Elias Fries reported lichens growing on a church window in Falsterbo in Sweden and since then there have been many additional published records of vitricolous lichens. Many of these records are from windows but vitricolous lichens were not confined to windows. In 1879 the British lichenologist James Crombie wrote of: "Vitricole Lichens, which in this country, we have only observed on broken pieces of bottles on garden wall tops, chiefly in Scotland". Many an old property perimeter wall was topped by a concrete layer into which, when the concrete was fresh, broken glass had been embedded to stop would-be trespassers climbing over

Lichens on glass are by no means rare. As noted by Crombie some lichens will readily colonise broken glass but occasionally you find more impressive examples, such as the whole bottle pictured to the right, also with Xanthparmelia mougeotina. This bottle was found about 15 kilometres north of Queanbeyan, also in New South Wales. Here

is an abandoned school bus in southern Western Australia. Vitricolous species would require many years of undisturbed growth to get to the easily visible sizes shown in these photos. Abandoned glass is ideal whereas lichens would have greater difficulty establishing on glass that is periodically cleaned, such as the windows of many buildings.

For her doctoral thesis of 1922 Ethel Mellor undertook a detailed examination of 77 pieces of old stained glass, focussing on corrosion and lichens. The glass had been collected for her from churches in several areas of France, presumably during restoration work on church windows. All the pieces showed signs of deterioration and the majority bore lichens. Mellor recorded a total of 16 vitricolous species, though she noted a number of sub-specific variants within three of those species so bringing the total number of taxa to 22. Diploicia canescens was the most common taxon, being found on 32 pieces and the other two in the top three were Pertusaria leucosora (25) and Lepraria flava (17). The current name for the third species is Chrysothrix candelaris. The species reported from glass are not confined to that substrate. For example, Diploicia canescens is also found growing on rock or bark and Chrysothrix candelaris is most often found on wood. Mellor found Ramalina polymorpha var. ligulata on just one piece of glass and eight other taxa were also found on just one glass sample each. However, though a taxon may have been found on just one piece of glass it could be abundant when found. Thus on the glass sample with the Ramalina there were about 20 of the Ramalina thalli. The following diagram (figure 2 in Mellor's thesis) shows two upright Ramalina thalli (each about 7 millimetres tall) growing from slight pits in the glass surface and most of the Ramalina thalli were anchored in such pits. This piece of glass (with an area of 82.5 square centimetres) also supported a single 7 millimetre diameter thallus of Diploicia canescens, several thalli of Pertusaria leucosora (from 4 to 22 millimetres in diameter) and remnants of what might have been Lecania erysibe.

Of the 22 taxa reported by Mellor, 18 were found growing only on what had been external surfaces of the glass. The species Diploicia canescens, Lepraria flava (Chrysothrix candelaris) and Pertusaria leucosora were found mostly on outer surfaces but had also grown on inner sides of church windows. Chrysothrix candelaris has a granular appearance, with no well-defined thallus. The other two will develop well-defined thalli and while the thalli of Diploicia canescens that grew on the inner glass surfaces were as well developed as those found on outer surfaces, in the case of Pertusaria leucosora the inner thalli were not as well developed. The last of the 22 taxa, Biatorina erysiboides in Mellor's thesis and known today as Catillaria erysiboides, was found on 14 glass samples but always on what had been the inner surfaces. 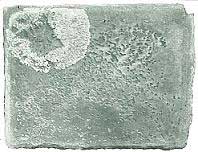 Mellor collaborated in another study of lichens on 17 pieces of stained glass from churches in Mayenne, France. Three lichen species were found, with Diploicia canescens on 5 of the 17 pieces and the other species on either one or two glass pieces. The paper about the Mayenne study included the photograph on the right which, in its upper left, shows a roughly circular thallus of Diploicia canescens, with a missing central area. The thallus is 4 centimetres in diameter. Also visible is pitting damage on much of the rest of this piece of glass

Mellor had no doubt that lichens caused deterioration in glass by both mechanical and chemical means though there has been considerable debate as to whether lichens are the primary causes of glass deterioration, with evidence that smooth, undamaged glass is a difficult substrate for lichens to colonise. In regard to that point Mellor noted that on smooth glass she had found just four of her 22 taxa. Two of these four were represented on smooth glass by just a few small thalli. The other two were Lepraria flava and Diploicia canescens. The majority of records of the former and almost all records of the latter were from smooth glass. Diploicia canescens was the commonest of the vitricolous lichens found by Mellor, with numerous thalli on 32 of the 77 glass samples. Mellor found just three thalli attached to corroded glass and so it appeared that this species could colonise smooth glass fairly easily but had difficulty growing on corroded glass.

Factors such as mechanical treatment during manufacture and chemical composition influence the susceptibility of glass to future corrosion. For example, a study half a century after Mellor's work showed corrosion worse in glass with a low silica/lime ratio and considerable variation in this ratio - from 6 in some samples of Roman glass to about 2 or less in a couple of samples of medieval or later glass from York and Winchester in England. Adding support to the idea that lichens are not a primary cause is that though all Mellor's glass pieces had corrosion damage (typically small pits) not all the glass pieces bore lichens and in the pieces with lichens not necessarily all pits contained lichens. Others have similarly observed that in pitted glass, lichen-free pits commonly outnumber pits with lichen thalli. However, even allowing for lichens not being primary agents, once lichens have colonised glass they can contribute to its further weathering. Water trapped between a lichen thallus and the glass surface takes up some of the carbon dioxide respired by the lichen and thereby becomes weakly acidic and hence a means of chemical weathering. Rhizines anchoring a lichen to the glass surface may be a source of mechanical stress. Weathering leads to small fragments of glass being loosened from the glass surface and, as Mellor showed, fragments of eroded glass can become incorporated into lichen thalli as they grow. You can see two of Mellor's micro-photos showing that by following this link 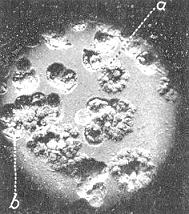 The idea of MICROHABITATS is important in lichen ecology. Sometimes a shift of just a few centimetres means a significant change in conditions and hence a change in ability of certain lichens to establish or grow. Some of the observations made on this page highlight microhabitats. For example, it's been noted that, generally, it is difficult for lichens to establish on smooth glass but that corroded glass provides easy points of establishment. It may be that tiny pits or furrows make it easier for propagules to lodge but it is also likely that moisture will be held at least a little longer in such pits or furrows than on the smooth surface, so providing more moisture for a developing thallus. The accompanying photo (again from Mellor's thesis) shows a number of pits with small lichen thalli in them. Contrariwise you've seen that, at least in Mellor's samples, Diploicia canescens seemed to grow more readily on smooth surfaces. So, in pitted glass you have distinct smooth and pit microhabitats side by side. Mellor wrote that she found Biatorina erysiboides only on what had been the inner surfaces of church windows. Certainly the levels of light and humidity would be different on the inner and outer surfaces so that the two sides of a glass window provide different microhabitats.

The title of a brief French language paper of 1890 can be translated into English as: Lichens attacking glass seem to prefer certain colours in stained glass windows. The author observed lichen growth following the pattern in a picture, though the author also noted that a colour which was unaffected on one window could be colonised in another. Coloured glass was produced by the addition of various metallic compounds and, as noted on the POLLUTION page, some metals strongly inhibit lichen growth. Therefore it would not be too surprising if lichens showed some colour preferences. On the other hand Mellor, in her thesis, concluded that colour had no influence on the growth of lichens though grey and yellow glass were most resistant to corrosion. In the Mayenne study the authors wrote that the metal salts which were used to colour glass were doubtless present in low enough concentrations as to have little effect on lichen growth