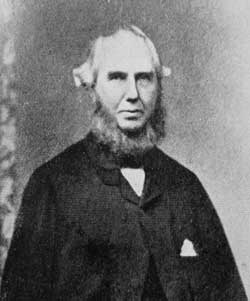 Arrived in Tasmania on 5 February 1830, and rapidly gained a series of government posts. Later managed the estates of W.E.Lawrence and of Lady Jane Franklin. Recruited by Robert Lawrence to send plant specimens to William Hooker at Kew. From 1832-1860 Gunn sent Hooker many hundreds of specimens from most parts of Tasmania. He also made several visits to Victoria. Gunn was a close associate of (and worked for) Governor Sir John and Lady Franklin, and hosted botanists such as W.H.Harvey, J.D.Hooker and Dumont d'Urville during their visits to Hobart. Gunn gathered around him a keen group of local naturalists including Mary Ballantine, William Breton, Richard Davies, John Lillie, John Robertson, Charlotte Smith and John Smith. Collections made by these persons and others (e.g. the convict servants James Lee and George Moran) were also forwarded to the Hookers. He presented his collection to the Royal Society of Tasmania in 1876 (?or 1878), and it was housed in the Tasmanian Museum. Much of this collection was transferred to NSW for safekeeping in about 1904. A set of duplicates and other material was subsequently returned to HO. Gunn's collections are thus to be found in K (specimens sent to the Hookers), and NSW (Gunn's main personal collection), with other large numbers in BM, CGE (distributed by the Hookers to Lindley) and H.O. Osborn (1952) noted 1000 Gunn specimens in OXF. Small numbers of specimens are found elsewhere, including B, BRSL, C, CO, CN, F, FI, G, G-DC, GH, K, KIEL, L, LE, M, MEL, MO, P, S, TCD, US, W and WAG.