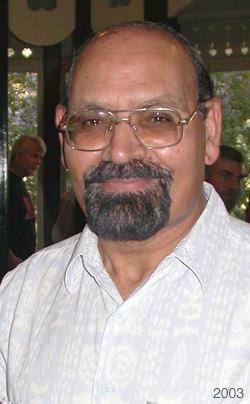 This is a modification of a talk given to a gathering of family, friend and colleagues at the State Herbarium of South Australia on the occasion of his retirement on 10 August 2001. Bob Chinnock and Nick Donner spoke briefly and a Power Point presentation was shown throughout with illustrations of Munir’s life.

From what must be close to the very first day Munir arrived in Adelaide on 11 March 1971 we shared experiences – experiences of the Botany Department with teaching of undergraduates, of seminars, and of the commencement of our long and full relationship with the work of the State Herbarium and particularly the people that have worked in it. I had already started a Ph.D. in plant systematics and we shared our two supervisors Hansjoerg Eichler of the State Herbarium and Con Eardley of the Botany Department in the University of Adelaide.

A few months after Munir and Rashida’s arrival with a young 2 year old Kashif, Rashid was born.

They were the days when the strong ties between the Botany Department and the State Herbarium were very strong indeed. As was written by Alison MacCusker in her obituary of Sir Rutherford Robertson, who had left for ANU in 1969:

It is a pity that we have lost most of that postgraduate contact here. Hopefully the new alliance in the new Centre for Evolutionary Biology and Biodiversity involving the original Botany Department, now merged with Zoology in the Department of Environmental Biology, the SA Museum, and sections of the Waite Institute will see a return of postgraduate research to the State Herbarium, with the stimulation and enrichment that goes with it.

Munir is not the first of this earlier cohort to retire. He is preceded by Paul Wilson in the WA Herbarium and Dick Schodde who became head of (animal) collections in CSIRO Wildlife.

Memories are many. Dear Con Eardley, or "Miss Eardley" as we respectfully would address her, is high in them. She had a deep concern to assist overseas and particularly Asian students, and took Munir and family very much under her wing from the start. Her nervous disposition and expression and often simplistic presentation subjected her to much ridicule amongst the students. But she was not the fool she was sometimes considered. Rather, her concern for others made her prone to being distracted. Munir will have been given lifts home with her. One instance of this is firmly planted in my mind. Through politeness I remained speechless, not once, but twice, while she slowly drove through red-lights on King William Street. For fear of our lives I plucked up the courage to point out her inattention, to which she gratefully requested that I remind her in advance of her responsibilities for the rest of the drive.

And Munir will remember sharing a meal at the University Staff Club with Con to celebrate completing my thesis. Despite our concern throughout the evening, by the time we’d finished our three courses Con had not completed her soup.

Munir also shares memories of our co-superviser Hansjoerg Eichler, with his high ideals. Munir came to Adelaide an experienced taxonomist and Hansjoerg gave him the respect he deserved. "Bill" he would call me, but it was always "Mr Munir". In contrast to my own venture into the Scrophulariaceae, where I did much sifting and sorting of specimens in establishing concepts and did little descriptive work until I had experienced plants in the field, Munir began describing species as soon as he could lay his hands on the specimens. And, in finding that there was insufficient time available for the State Herbarium to provide Ludwig Dutkiewicz as an artist, he embarked on his own period as a botanical artist. Munir’s comments on his line drawings: "they are not beautiful but they are accurate scientifically". I agree with the latter, but do believe that his work does have a real delight in its distinctive style. And Munir proudly recounts that on surveying the spread of his artistic talents Hansjoerg said "Mr Munir, I do not regret having you here".

Munir already had a lot of experience when he arrived in Adelaide. He started after me at a Ph.D. and is reputedly 12 years older, but John Jessop tells me that there was no record of his birth date when he was appointed. Having obtained his B.Sc. in the Punjab University in Lahore in 1960, Munir completed his M.Sc. project by 1962, rendering an account of 500 species that made up the "Flora of Sind University new campus, Jamshoro". At the end of 1963 he accepted a Senior Colombo Plan Fellowship at the Singapore Botanic Gardens under then Director, Mr H.M. Burkill. Munir’s mentors in Singapore were Dr Chew Wee Leck, an expert in Urticaceae and later to end up in NSW, and the retired Dr C.X. Furtado, a palm specialist. Munir was offered a room of his own, but he opted to continue to share with Dr Furtado, so well they got on. He remembers the rollicking return from Britain en route to Borneo of the famous E.J.H. Corner, the former Director of the Gardens and a global expert on figs, fungi, seeds and just about everything else. He is infamous for the monkeys that he trained to climb trees and throw down herbarium material. A great party was had. Munir describes him as "charismatic, jolly, friendly, knowledgeable".

While in Singapore Munir embarked on a major publication programme on Malesian Verbenaceae, the start of a lifetime of work in this family. He published accounts of Petraeovitex, Symphorema, and the large genera Congea and Sphenodesma. He returned to Sind University at the end of 1965, where he lectured for six years. He arrived in Adelaide, in 1971 having accepted the offer of a University Research Grant of $1600. Soon after his arrival he received further offers from Sydney University under Roger Carolin (for $3000) and also Oxford and Cornell Universities, but he chose to remain in Adelaide.

Before Munir and I had finished our doctorates, in 1973, Hansjoerg Eichler moved on to head the CSIRO’s Herbarium Australiense and we were left to correspond over drafts of our manuscript.

We shared a large room, the former tea room. In the narrow walkway between the benches lining the wall and the large central area, composed of spare bench tops, made for spreading out our specimens, the elderly Mr Ising’s rendition of his creationist Chenopod classification was enhanced by the ritual of laying out a mattress for his lunch-hour naps.

Munir experienced his Chloanthaceae, then often included in the Verbenaceae, for the first time in the field in 1973 when he and Nick Donner of the State Herbarium visited the deserts of Central and Western Australia. Bob Chinnock and Brendan Lay also undertook the trip and kept in loose contact They all joined forces in the Territory with John Maconochie and Peter Latz.

John Jessop took up the appointment as Chief Botanist in 1974, and the appointment of the productive Munir to a new Botanist’s position in February 1975 as the first of an expansion of staff was very appropriate. For John led the State Herbarium into an era of publication, producing a new house journal and the Central Australian Flora and the Flora of South Australia and the collaborative ventures with other floras, notably the Flora of Australia

Munir’s thesis was published in Canberra’s upgraded house journal Brunonia, the forerunner to Australian Systematic Botany, and took up a whole volume. He had earlier published a paper in the first volume of the series. But most of his subsequent revisions appeared in the Journal of the Adelaide Botanic Gardens, including the first volume.

Munir added to the mixed bag of nationalities that made up the Herbarium at the time. Munir had arrived while Barb Welling, Eric Jackson and David Whibley were the only Aussies present. We had Hansjoerg and Marlies Eichler from Germany, Vilja Jaegermann from Estonia, Kosmyn Chorney from the Ukraine, Ludwig Dutkiewicz from Poland, Joe Weber and Nick Donner from Yugoslavia and John Carrick from Scotland. Bob Chinnock had arrived latterly from New Zealand, and, following Hansjoerg’s move to Canberra, John Jessop from South Africa arrived as the new Chief Botanist. In 1976 I joined the staff after a couple of years in New Guinea, with Tina Eadsforth from Britain. Hellmut followed in John's footsteps, and I think only then was there a move to local blood, notably Kathie Stove, Graham Bell and Gilbert Dashorst.

A highlight for Munir was his stint as ABLO at Kew in 1979-80. There he experienced many of the names associated with global taxonomy and was reunited with Mr Burkill the former Director at Singapore.

In 1983 he went on a second memorable trip, this time to the Top End with Joe Weber. They made the mistake of camping in the same place twice in Arnhem Land and had to up camp with a fire bearing down on them at dusk the second night.

Munir has given the State Herbarium 25 years of loyal service. He is a creature of habit in his approach to his botanical work. He continues to write his manuscripts in long hand. But he has successfully adapted to the computer – he would be the first to say he is not as adept as some, but he knows enough about it to handle email basics readily and to have edited the whole of his Flora manuscripts. He will have completed his mission as a taxonomic botanist with his forthcoming accounts in the Flora of Australia of the families Verbenaceae and Chloanthaceae, 26 genera in all in Australia.

Munir’s loyalty and application to his missions in life also shines through in his keeping of his Islamic faith and his assistance to his compatriots. Having worked for 2-3 years as Chairman of the Ahmadiyya Muslim Community, he is now their elected President.

We wish Munir and his family well in his retirement. We expect him back, even if it is only to keep up with the identifications in Verbenaceae.